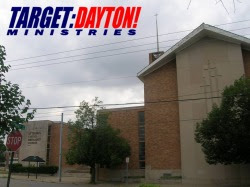 He spoke of how he had been down on his luck.  Addictions had gotten the best of him.  He was suicidal.  Then Target: Dayton! entered his life and told him about Jesus.  Now he's stayed in a hotel where President's have slept and sang with the Brooklyn Tabernacle Choir!  Ah, God is good...
Posted by Lillian Robinson 2 comments: