Update: Sadly, we no longer have goats. As we begin to travel and prepare to sell our farm, we have 'downsized' our fur family. This part of our journey is hard. I miss them so much! I'll always treasure the joy we got from them. I wish I could have kept them, but they're not so fond of traveling. Please, enjoy reading about them. They show up a lot in my stories.

Even before we moved out here, Ray started talking about goats.

He was obsessed.
I was worried.

I kept having visions of bare spots around the house where shrubs used to be.  I didn't know a thing about goats, other than they liked to eat everything.

As I learned more about them, I realized that we needed goats.  We had a lot of acreage to tend, and goats are terrific at cleaning out the woods.  I didn't realize how utterly amazing and adorable goats can be! 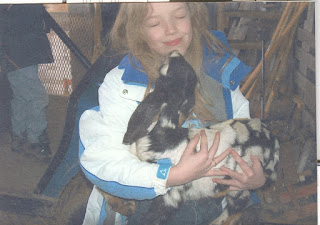 We heard about a pair of wethers (castrated males) that were soon to be for sale.  We took Dani with us to look at them.  She fell in love with Domino, but before they were old enough to leave, Domino died.  We still wanted his brother, but now we had to find another goat.  Goats are very much a social animal.  They do not do well alone.


We found another breeder and went to look at the  wethers she had left.  We couldn't decide which ones we wanted, so we took them all!  Yep, four boys and a girl.  Don't forget, we still promised to take that other boy...

We were told that it's best to get them young, before they are weaned, so they will bond.  And so we did. We got them young and bottle fed them. That in itself was an experience! But they were so incredibly cute! 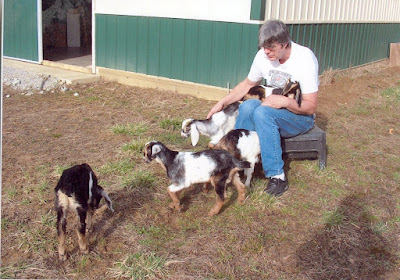 Allow me to introduce them individually...

Rocky (because he was a fighter) was a scrawny little thing.  He's the one in Mr J's lap.  We even kept him in the house for a little while.  I tried every thing in my power to help him survive, but it was all for naught.  He wasn't with us long, but his memory is still here.  R.I.P Little Rocky 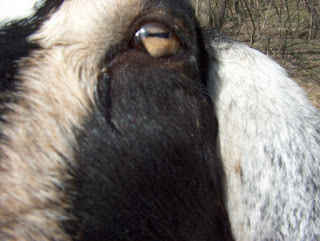 The gray and white goat in the foreground is Biscuit.  Mr J named him.  Biscuit loves shirts and cameras.  Whenever anyone is in or near the goat pasture, if they feel a tug on their shirt, you know instantly who is responsible.  If I try to take pictures of Biscuit, I always hadve to stop and clean my lens...  He lovedsgetting his nose up into it! 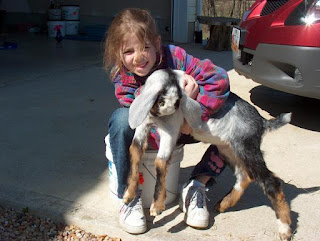 In the top photo, Mr J has his hand on Willie.  He wis the biggest of the bunch and has a personality to go with it.  He never ceases to make me laugh!   Silly Willie is my favorite, and Lexi's too.  Here she is trying to hold him still for a picture... 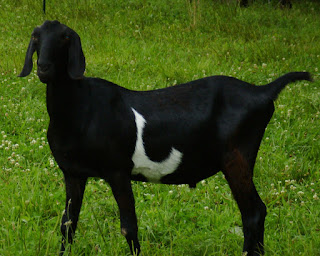 When we first met this little guy, he had a big white circle on his belly.  And, since his brother had been named Domino, Dani decided to name this guy Oreo.  As he grew, he outgrew the circle.

This photo doesn't do him justice... you can't even see his curly hair.  He is a strikingly beautiful creature!   ...and Mr J's favorite. 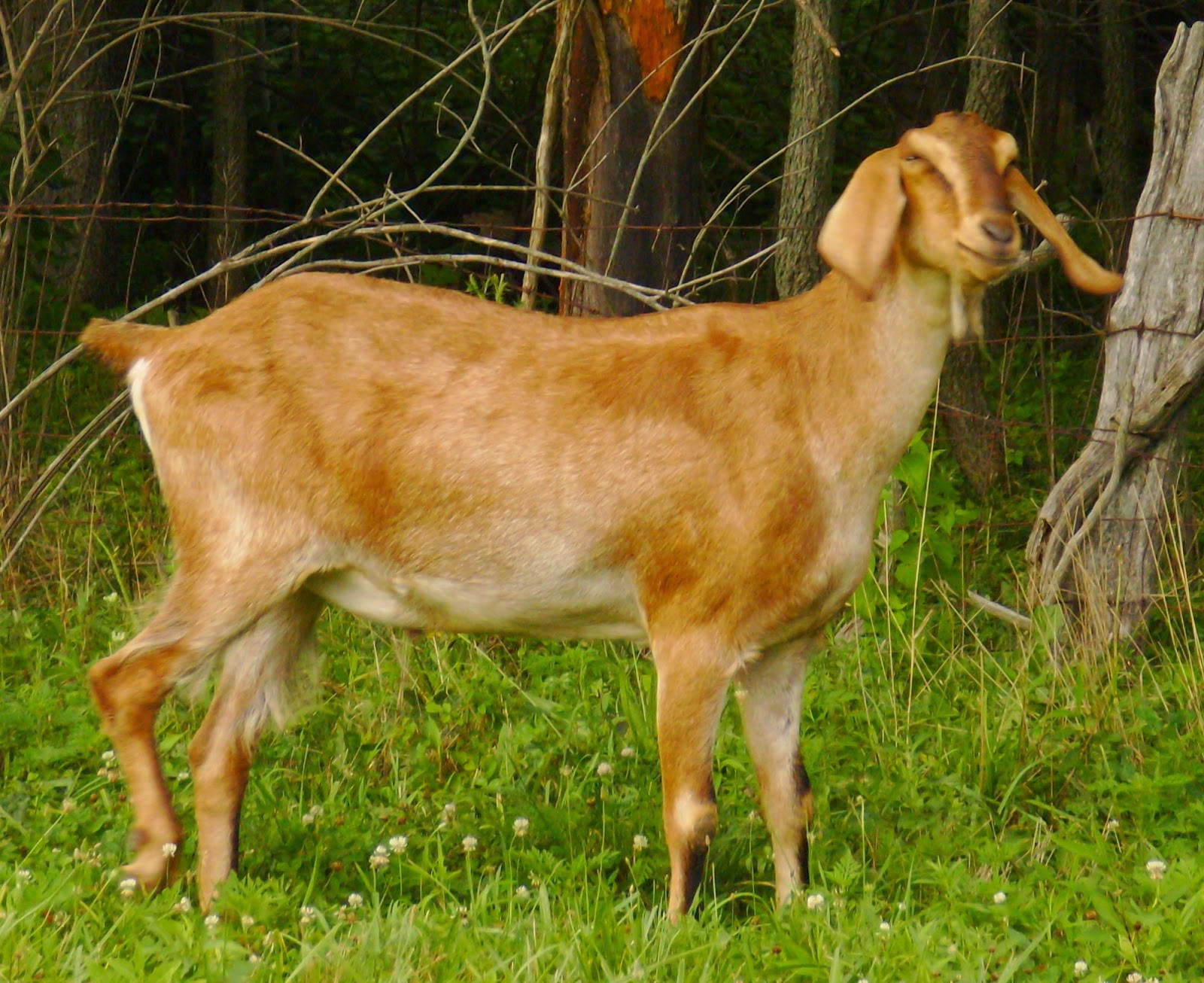 Meet Elvis. He already had the name.  We already had five goats!  He used to live with Nekoda's former owner.  She hated him.  When I picked up Nekoda, I told her, "Throw the goat in the trailer, too.  If he acts OK, I'll keep him.  If not, I'll bring him back."  He stayed.

He was quite a loner when he first arrived, but he found his place in the herd. When he is in the woods, he looks just like a young deer weaving through the trees, so I always worry about him during hunting season. 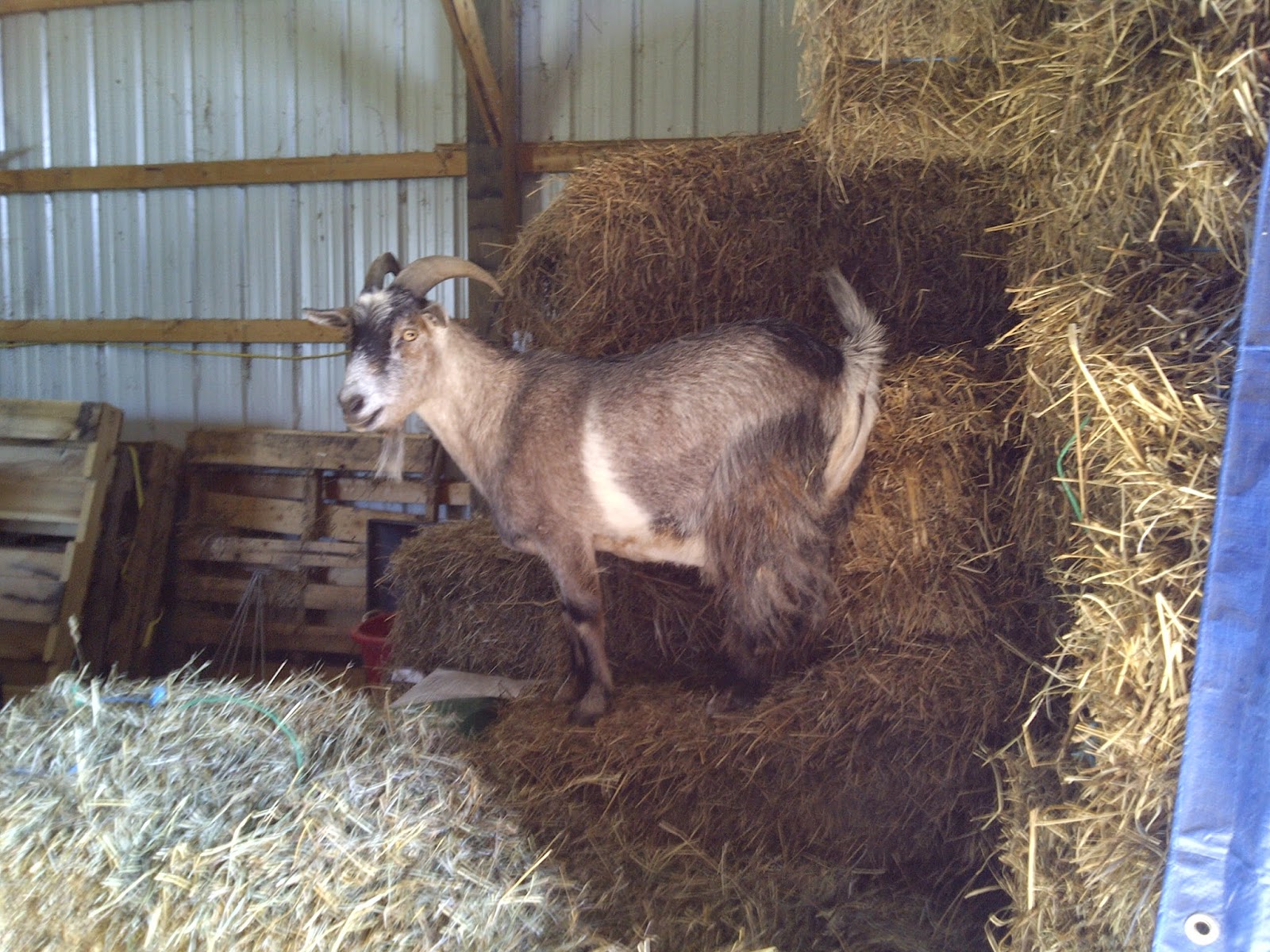 Last, but certainly not least, here is Stitch.
A friend was going through some medical issues, and needed to find a home for her elderly pet pigmy. He lost his BFF (a sheep) and was quite lonely. Only problem was, he didn't realize he was a goat. He didn't want anything to do with our herd. He instantly bonded with my TBM Maggie. As a matter of fact, there are few pictures of him away from her. He clings so tightly that, when I ride Maggie, my feet are kicking his horns! 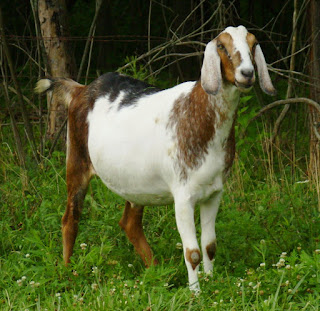 The goat with his tail between Mr J's legs is Derby... my lover boy!  Derby is the most affectionate critter, and can't get enough of my kisses.  I named him Derby because of his white 'English saddle' he was born with.   (Now that he's all grown up, the saddle doesn't look so much like a saddle.)

Derby has a very laid-back personality... except when it comes to food.  He's a very aggressive eater, and he always eats way too much! That can be fatal for a goat, but he has been lucky...so far. 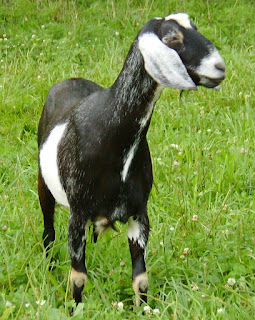 Some goat breeders detest using the name Nanny for a nanny, but here's Nanny.  She's our only little girl.  She was a freebie, throw in with the other boys.  The breeder didn't think she was worth anything because she has an extra teat.  She's worth a lot to us!  She has a very sweet disposition... so different from the boys.  And they really seem to treat her gentler, like a little sister.

Don't mistake this sweet face for something delicate... Nanny can certainly hold her own on the rock 'mountain'. 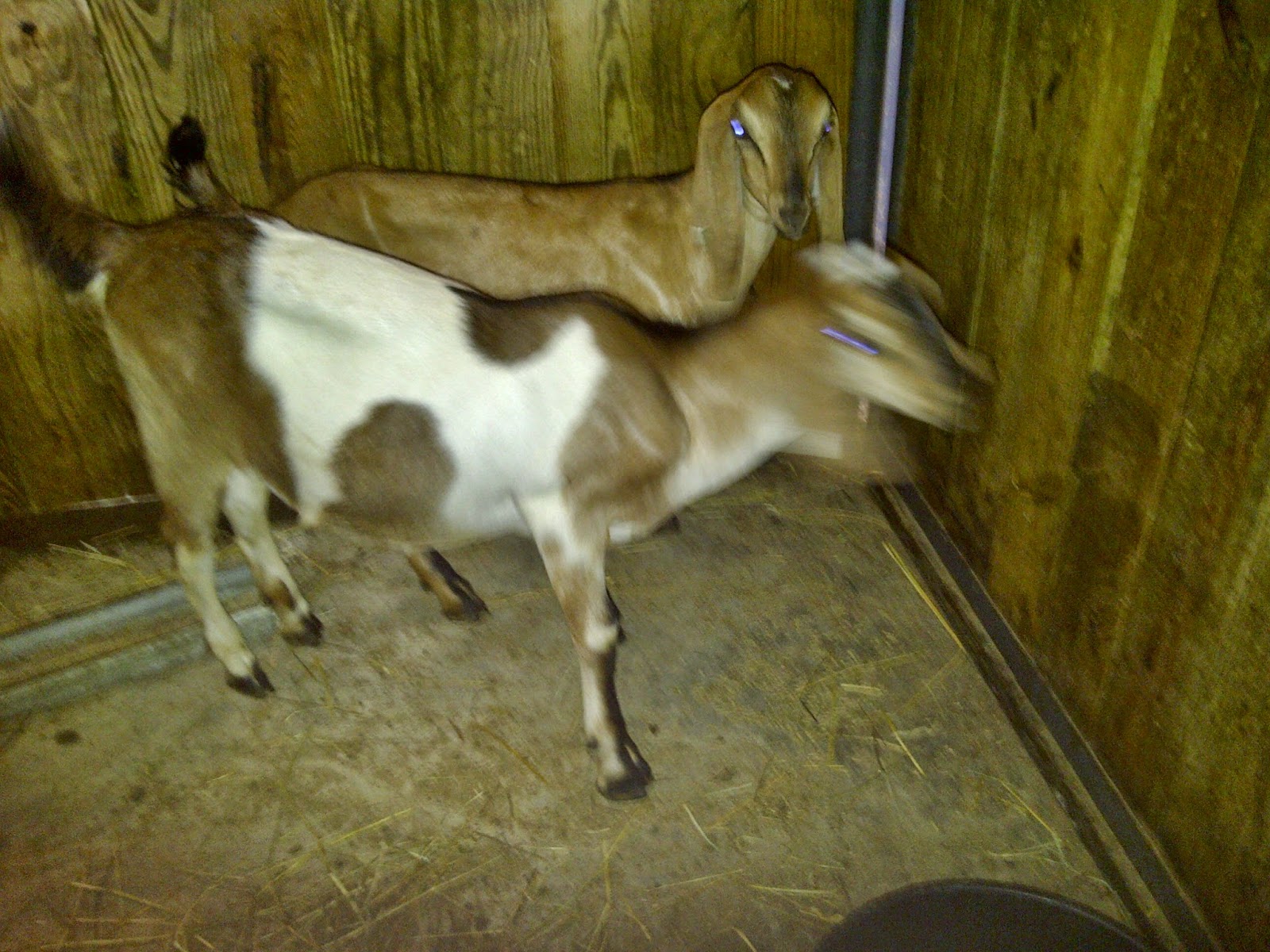 As we saw Elvis and Stitch aging fast, we new that we needed to think about getting some young goats. A nearby farm breeds Nubians, so we picked out these two wethers. We named the one in front Derby Jr. because of his white saddle. The one in the back is Brownie. Even though he looks like an Elvis Jr., he was named in honor of Mr J's football team. (Yes, there really are Cleveland Browns fans out there.)

They were already weaned, so it was an adventure to tame them!

The goats have paid for their upkeep in the work they do around here! Our wooded areas were overrun with wild roses and honeysuckle.  We couldn't walk through it!  Now, the area the goats take care of looks almost like a public park.  The grass looks as though we mow it and it's very easy to walk through. And speaking of walking...  the goats take walks with us in the woods.  They follow us like well-trained dogs.  The best part is we only have to feed them in the winter!  Spring, summer, and fall they live off the land.  We provide them with fresh water, baking soda and minerals, but they fix their own meals!

Our goats are as sweet as Sadie!  They entertain us with their version of king of the mountain.   They entertain are guests--children and grown-ups alike.  I adore them.