Ever since we built this farm, we've talked about a dog.  Hubby and I don't always see eye-to-eye about what breed is best for farm and family life.  I didn't want a great Dane or a bull mastiff.  I love Dobermans, but they don't do well in cold weather.  We needed a hardy dog that would stay outside all day if we did.  A dog that didn't chase cats.  A dog that loved kids.  A dog that wasn't hyper...

One day, Ray announced that a friend of a friend of a friend needed to find a home for a young yellow lab.  (Due to a death in the family, the dog's owner had to move from a home in the country to a small apartment.)  Her time had run out and no one had any interest in giving her dog a home.  She was desperate, not wanting her to go to a shelter.  You think I'm crazy?  I've been around labs.  They bounce off the walls... not the greatest house dog!  Have you ever heard anyone describe a lab as 'laid-back'?

We went to look at Maevis.  We pulled up to the no-pets-allowed apartment building to find the lady moving in her furniture.  There was a very young yellow lab laying under a tree... no leash... no tie-out.  The lady tearfully called to her.  She came.  We immediately fell in love.  I promised her that her dog would be loved more than any dog anywhere.  She cried.  We hugged.

I asked Maevis if she wanted to go for a ride.  Turns out, it was one of her favorite things to do! 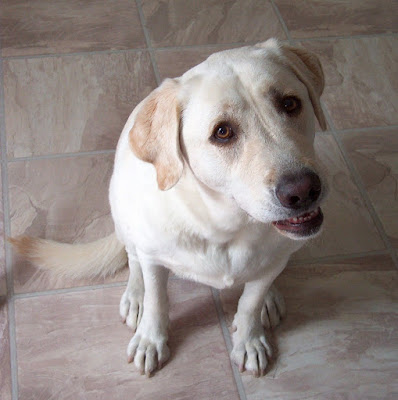 In the beginning, the cats ran from her... which just made Sadie run, too!  She thought it was a game. 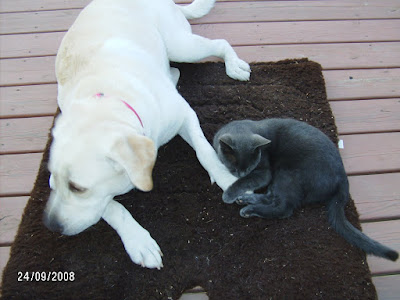 Soon, Mickey realized that the other cats would leave her alone when she was with Sadie.  (Mickey is the runt that gets beat up on by her little mates.)  Mickey loved naps on the deck with Sadie!  Sadie loved them, too. 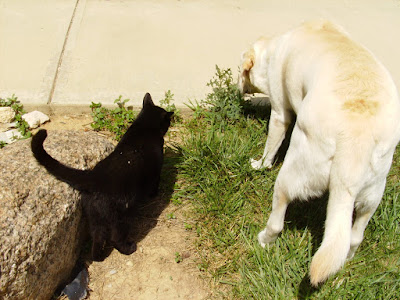 Eventually, the other cats learned that if they didn't run, she didn't chase...

The kids quickly fell in love with Sadie...

Lexi slept on the floor, just to be near her.  You can see in the photo that Sadie chose to be even closer... Sadie's front paw is on her bed.


When the little ones 'camped out' in their tent (in the living room), Sadie slept by the door. 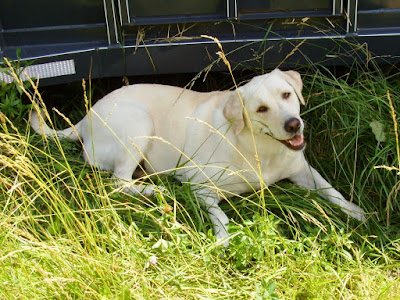 Sadie loved long grass and shade...  as long as she could see 'Daddy' from her chosen spot! 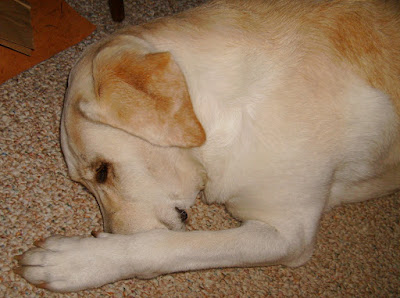 Sadie loved to sleep with her paw over her nose.  It made her snore really LOUD! 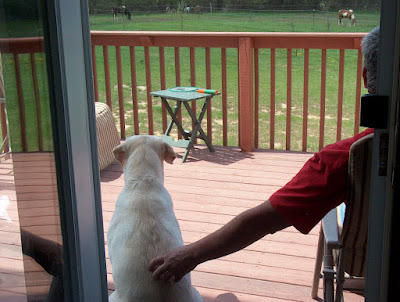 These two were always together...

I had hoped they would have many long years to spend side-by-side here on the farm. 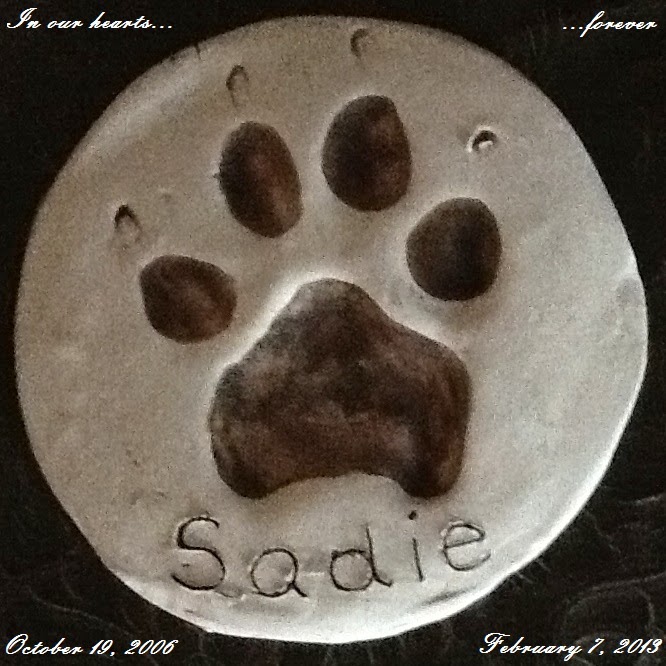 At the young age of six,
Sadie was stricken with bone cancer.
Her pain quickly became hard to manage,
so we made the tough decision...

My daughter had a pesky...um...sweet little WeeChon (mutt obtained by crossing a West Highland Terrier with a Bichon Frise) that she desperately needed to re-home. The dog was not a good fit with her high-energy home. (Four kids, another dog, multiple other pets, and lots of noise!) She asked me to please take SeeBoo (named after her favorite childhood teddy bear) on a trial basis--two or three weeks--if it didn't work out, bring him back.

He had lots of issues...

You couldn't bend over to pet him or he peed on the floor.
You couldn't touch his feet.
You couldn't brush his coat.
He had skin problems.
He barked non-stop.
He attacked other dogs.
He chased cats.
He hoarded kitchen trash in his cage.
He was the gassiest dog ever.
He went bonkers over reflections.
(And by bonkers, I mean a great level of insanity.)

Did I mention that neither Ray nor I was fond of this dog? 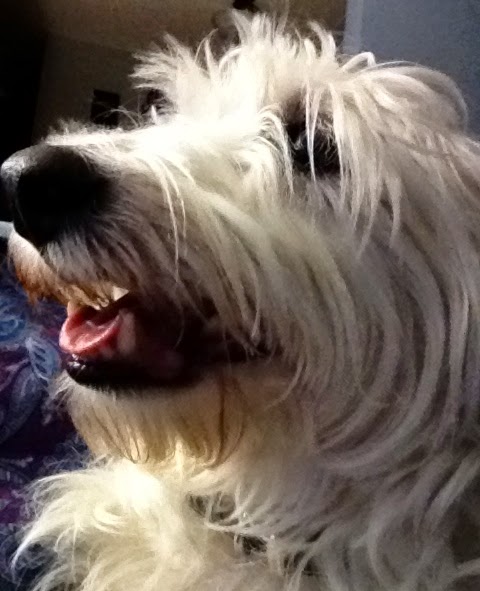 They are supposed to be hypo-allergenic.
At least they have a lot less hair than a lab.
Okay, maybe not so much...

We agreed to give him a try for the sake of family.
We decided ahead of time that he was going back after two weeks.
There was no need to keep him any longer... 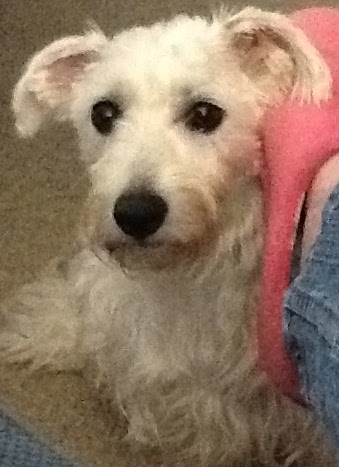 After a stressful haircut,
we found a cute face!

(Notice him leaning on my foot. He has to be touching me.) 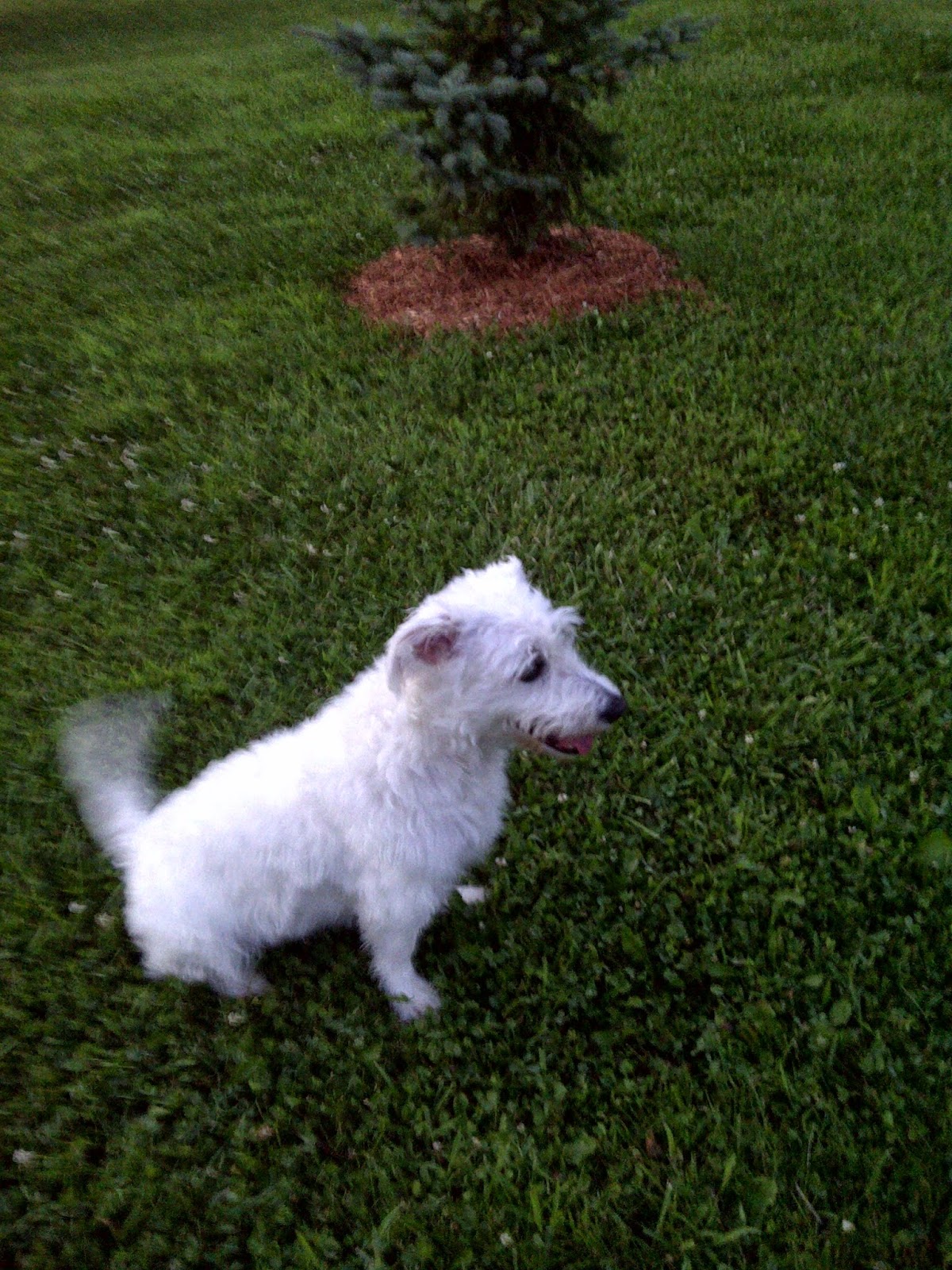 Boo enjoys life on the farm!


As of this writing, Boo has been with us for over two years.
He is still on a trial basis according to Mr J.
You still can't bend over to pet him or he pees on the floor.
You still can't touch his feet.
You still can't brush his coat.
He still doesn't like other dogs.
He still chases cats.
Given the opportunity, he still hoards kitchen trash in his cage.
He still goes bonkers over reflections.
But he is home.

At times, the man still insists he hates the dog...but guess where Boo naps? 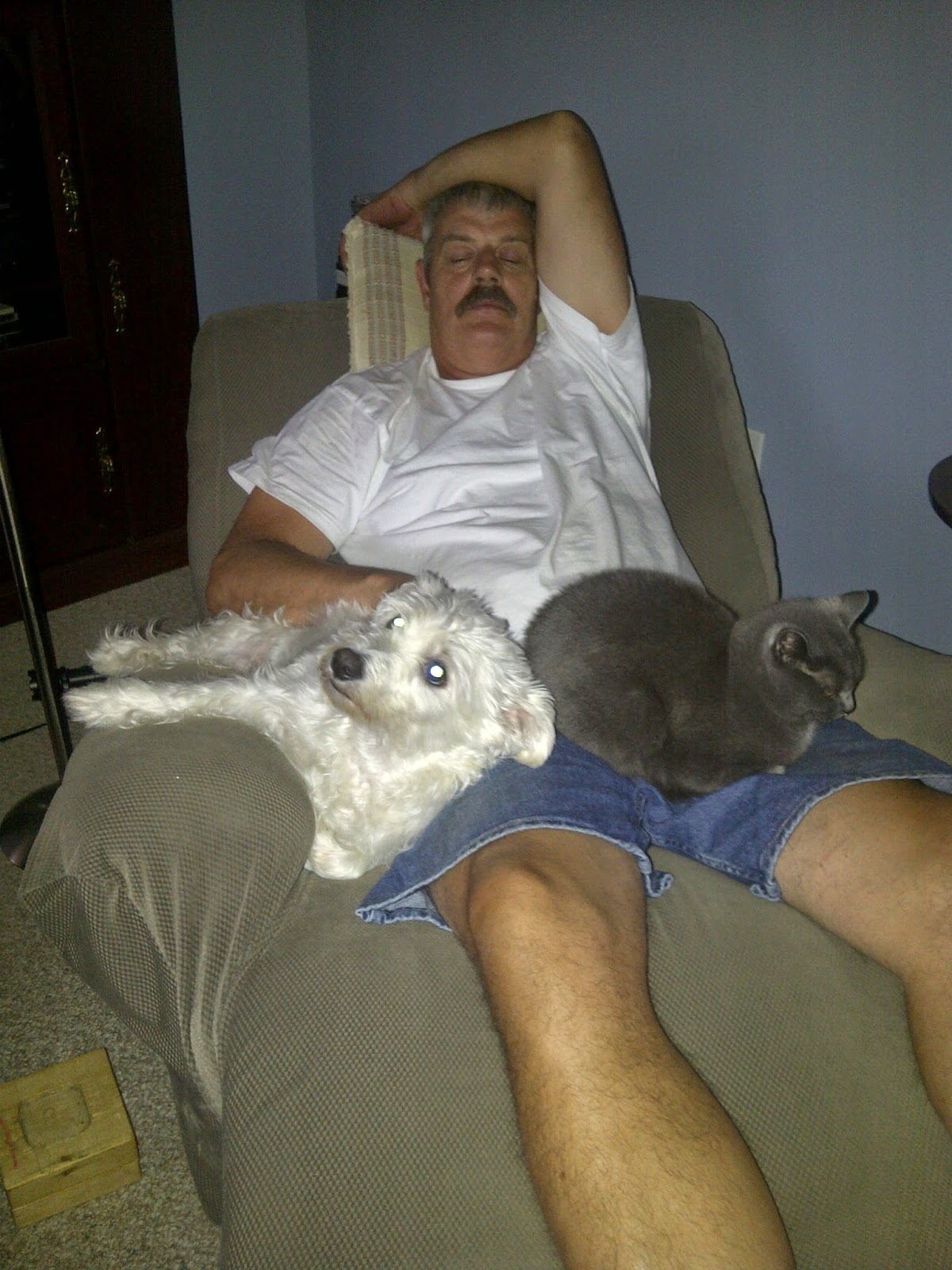 Boo has now been with us for over four years.
And yes, he is still on a trial basis according to Ray.
You still can't bend over to pet him or he pees on the floor.
You still can't touch his feet.
You still can't brush his coat.
He still doesn't like other dogs.
He still chases cats . . . well, lizards now.
Given the opportunity, he still hoards kitchen trash in his cage.
He still goes bonkers over reflections.

But he loves us.
He is well-behaved.
He loved traveling in the RV.
He loves his new back porch.
Yes, he is definitely home.