UPDATE:
All the critter tabs are from our farm years. All our still-living kitties were lovingly adopted by the new owners of our farm. The send us photos of our fur babies in text messages. Doozy's antics quickly caused her to became the new man's favorite.

When we started building our home in the country, I was down to one pet... 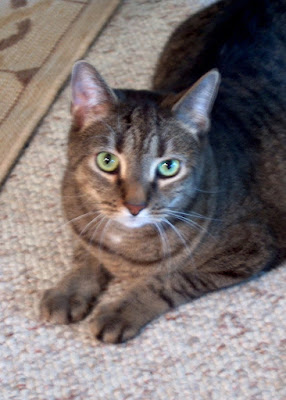 Smoochie was the best cat ever!  He had a personality like no other.  I've had more cats than I can count, and none compared.  I was living in Dayton with another cat and a Doberman (both shelter adoptions) when he found me.  He decided my house was better than the alley.

Smooch lived out his remaining years loving the farm life!  He died in his sleep in the barn.  He is buried beside it.  RIP dear Smoochie.  The hole you left in my heart has never been filled.

One day, while visiting our builder, Ray fell in love with some orphans... 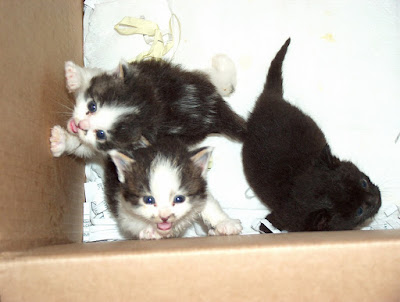 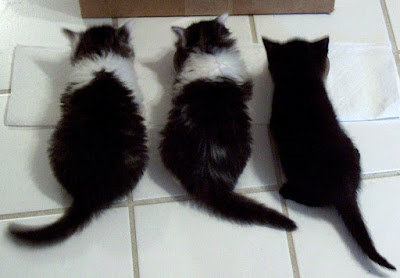 ...and they came home with us!  They were only days old and their bodies were cold, but they thrived.

Smooch took good care of them, trying to keep them out of trouble.  We kept them in the basement of the new house until spring.  We had planned on having them fixed when they were old enough...

Guess that shows how much we know about the physiology of cats!  All our cats are now neutered/spayed!  Some didn't survive the wild farm life, some found new homes.  We still have six of these. 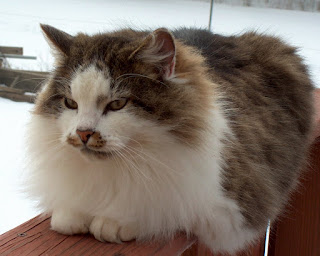 Chubbers is King! He had a healthy appetite from birth, and now is one hefty cat!  Contrary to rumors, he is not fat, and he is NOT on steroids! Half muscle, half fur. 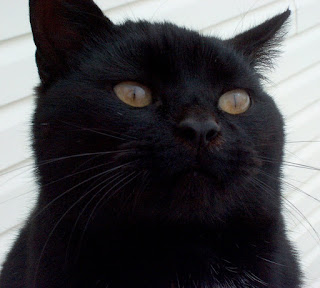 Little Bear is our resident queen--Chubs' sister.  She has catitude. Hates her family. Only wants to be in the barn with the others when it's ridiculously cold.

She is the mother of Benji, Mickey, Squeaky, and Ted E. Bear. She also had Panda (just disappeared one day) and Christian. He was solid black with an amazing white cross on his chest. He did not act very Christ-like. We found him a new indoor home without other cats. He is very happy there. 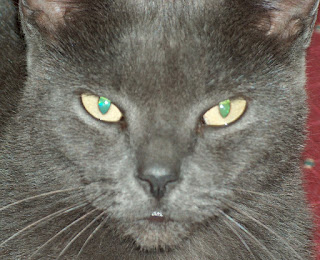 Mickey was the smallest girl of Little Bear's litter. She looked like a tiny mouse when she was born, hence the name.

The others wouldn't let her near the barn or the food bowl, so she eventually became the indoor cat.

I don't think I could sleep without her on the bed. 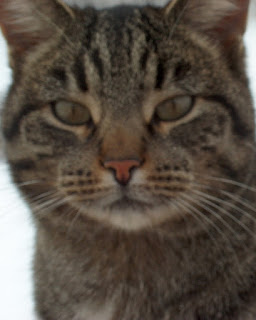 Benji is Little Bear's other daughter... a true barn cat.  She wouldn't dream of coming in the house, but she refuses to sleep outside!  Her home has always been on the hay stack.  Her favorite snack is a baby bunny.  She has been known to leave her scraps on the tractor!  She is a bit of a loner, but the others don't mess with her.  She can hold her own! Squeaky, Little Bear's son, is a talkative cat.
When he was a baby, he meowed constantly!  He still does!  If you talk to him, he meows.  If he walks, he meows.  He is afraid of everyone except me.  Nobody else can get within 5 feet of him!

He is not afraid of other cats.  He is a big bully... Chubber's sidekick.  Together, they decide when the others shall eat, sleep, whatever...

Teddy Bear (as we call him, but his official name is Ted E. Bear) is a very special boy.  He was the runt... so very tiny.  I didn't know if he'd make it in the tough world.  It's amazing how much respect the other cats give him.  Teddy has the most distinctive purr...  it's almost rattly.  His face does not give away his gentle nature--he looks the part of the Halloween cat, but he is the most lovable cat in the world!  Sadie got annoyed at him because he would constantly rub on her whenever he saw her.  Teddy walks with a drunk wobble... not because there's something wrong with him--it's just the way he is.

I'll post a picture of him when I find a good one.  For now, enjoy the video. 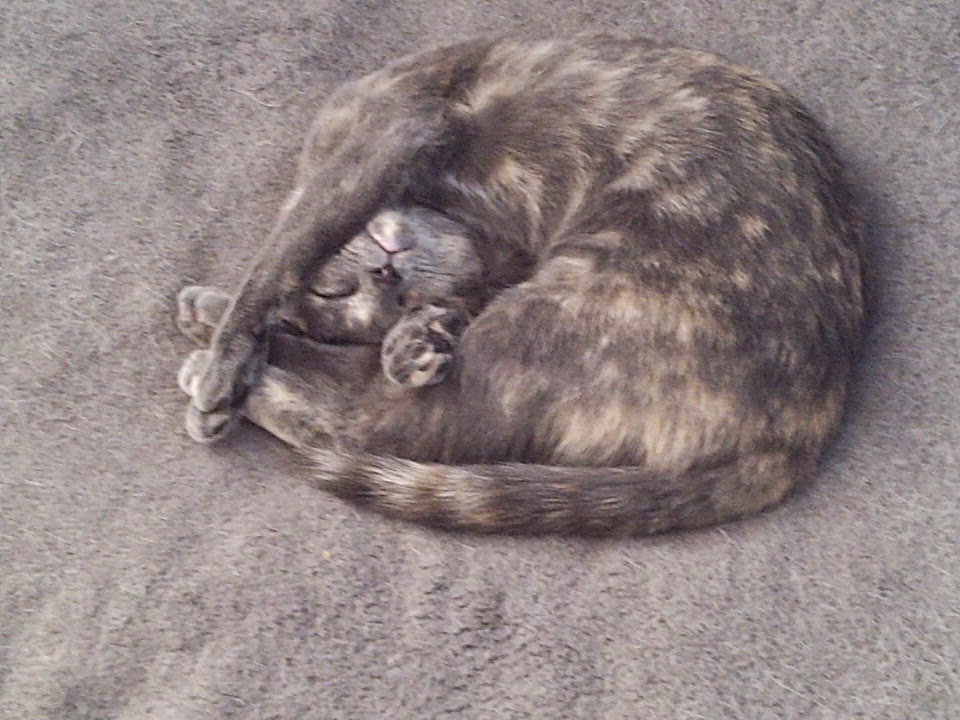 We surely didn't need another cat.

One evening, I was leaving my mom's apartment building, and spied this cutey. There are many strays there, as the older ladies love to put out food for them. This girl was extremely undernourished, and her coat was so thin, I could see her skin. It was clear to me that the other cats weren't letting her eat. It was also clear to me that, with the cold winter quickly approaching, she wasn't ready to fend off the cold.

I asked her if she wanted to live on a farm. She said yes. She was so regal looking with her long lean neck and legs--like an Egyption cat--that I named her Isabella. I had to keep her inside until she fattened up and grew a good coat. Oh. My. Lands. Her name was quickly changed to Doozy. And she was. A doozy! She broke things, chewed things, destroyed things. We couldn't wait to throw her outside! And when that day came, she quickly became Mr J's favorite. Entertaining doesn't even begin to describe her personality!