It's been three years since Maggie has seen Nekoda. I don't know if horses remember each other or not. Buddy had not yet arrived at our farm when Maggie left; We still had crazy Misty! Maggie seemed to remember me and this farm. She's been very lovable, wanting lots of rubs and kisses. She knew right where her old favorite patch of grass was! The stalls are across the aisle from where they were and the run-in shelter is farther from the back of the barn; but it all seemed to be familiar to her.

Horses establish a pecking order within their herd. Any additions to the herd can rearrange the whole line-up. The bottom horse can quickly become 2nd in command with a different leader! I had a feeling Buddy would have to give up a little rank...

It's important to introduce them slowly. You don't just open the gate and shove the new one in. They can be violent and hurt each other. And since Maggie is a senior citizen in horse years, I wanted to make sure that she didn't get injured by the younger ones. Since we got home late last night, Maggie didn't get to meet her pasture mates until today. Maggie spent the night inside Buddy's stall. Our horses only go inside to eat or if there is ice or some other weather that threatens their well-being. So Maggie had the barn to herself. (If Maggie had been boarded at a large facility or around lots of other horses, she would have been quarantined for a while before she got around the other two.)


While I was at church, Hubby moved Maggie to the round pen so she could roam around and eat grass. When I got home I opened the stalls and brought the young ones in. With Nekoda and Buddy safely locked in their stalls, I brought Maggie in on a lead. It went very well. Horses will sniff each other's breath... (Much nicer than the doggie version of greetings.) Maggie and Nekoda stayed nostril-to-nostril at the bars for a while, inhaling deeply. There was no stomping or kicking. After a bit she moved on over to Buddy's stall door. There were a couple of loud neighs & squeals, but nothing really aggressive. Neither attempted to nip between the bars. (Sorry there's no video, but working a camera at a time like this is a bad idea.)

After they satisfied themselves with exhaled horsey air, I turned Maggie out to the back pasture. She headed for that sweet spot and was out of sight of the barn door. I then took Buddy out of the paddock to the round pen. I figure I'd let him meet her later...

I put a line on Nekoda and led her to the opening to the pasture where Maggie was grazing. They both raised their heads up and eyed each other. Nekoda is not the least aggressive and I wasn't really worried about the two mares being turned loose together. I walked her part way down the pasture, then, with a quick warning to behave, turned her loose. She took off for Maggie. They sniffed each other's breath again and dropped their heads to graze. I exhaled. One down, one to go...

I left the girls in the pasture for awhile to bond. Buddy was happily munching on the overgrown grass in the center of the round pen. (It's not had a lot of use while I've been sick, so it looks more like a pasture than a work-out ring.) Occasionally, Nekoda would run back to the barn gate to yell over to Buddy. They don't like being separated! But then she would return to the grassy end with Maggie.

After a while I decided it was time to introduce Maggie and Buddy. I brought Nekoda back into her stall. She protested loudly! With Maggie at the other end of the pasture, I walked Buddy toward her. Buddy is pretty laid-back, but I wasn't about to take him up to Maggie on a lead. That could be dangerous. I would be just close enough to split them up if needed. Buddy was very attentive to Maggie, but seemed pretty calm as we got closer. I finally reached the end of my comfort zone and removed Buddy's halter. He trotted over to her and they sniffed... He smelled her neck... She squealed at him... He backed off... They started grazing! Wow, that was easy! I watched them closely for awhile. They stuck together, but respected each other's area.

By now, Nekoda had had just about enough of being shut in the stall. I opened the door and let her out. She took off for the grassy end of the pasture and I went for my camera. 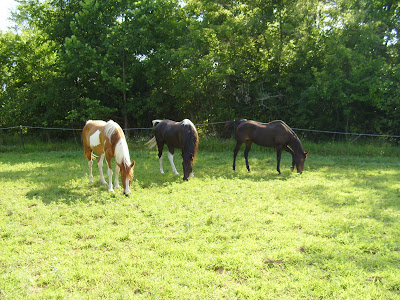 And again, things are as they should be...
Posted by Lillian Robinson

Oh that makes me happy! I didn't even need video you told it so well. I was there with you every minute. I am so happy they are getting along. I can't wait for more stories. How about those chickens??

I never knew that horses sniff each other like dogs do...well like you said in a graceful manner. Glad to see Maggie happy. Take care.

That is so interesting. I learned a lot about horse behavior that I never knew. So glad to know that all is well.

I'm learning about farm life each time i visit you.THAT was a lovely bonding.Glad all went well.

Hi. I didn't know how complicated horsey introductions could be, but it is worth it, the photo of your three horses show they are adorable.

As someone who has always lived in a city but is a country girl at heart, I love hearing your stories about your little farm. Though where do you get the time, and to write ... and blog???

I actually have just got two little additions to my pet family - guinea pigs so will post soon on my blog. :)

You didn't need a camera, you told that wonderfuly. I too learned a lot with that blog.

Your word pictures told the story wonderfully. I love being able to go down on the farm with you! And I must agree with Sharon: are you just an overachiever or do you fall into bed every night tired after having multi-tasked the day away??

I just tagged you with an award on my blog - then saw you already have this one! Girl you got it all going on!!! :)

I felt like I was there with you every step of the way! I love stopping by to visit with you and see what's going on at the farm. Still waiting for those chickens to come out I see.

No photos necessary, very well told. I am so glad Maggie is home and you have another ray of sunshine in your life.

What a great story. I've always loved horses, but never had any of my own. When I was little I went with some friends to ride a Shetland Pony. I was dumb and walked behind it. I remember the pony turning it's head to look at me and the next thing I knew, there was something dripping from my upper lip. Yep, it was blood, his hoof just clipped my upper lip, I only had to have 4 stitches. After that, I always stayed away from there back ends! They are beautiful animals.