chickens, and horses, and goats - oh my! 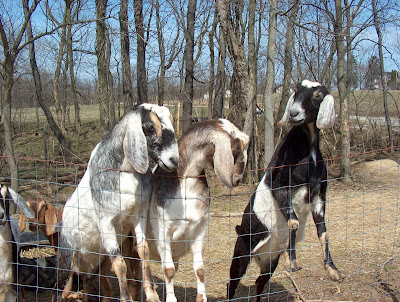 Ridding the critters of mites and worms... I never had these worries in the burbs. Hubby suspects the chicks are infested with mites. No big deal, it's quite a common thing, but still needs prompt attention. The big deal is in the treatment...

There is a powder that will eliminate the problem. The problem lies in that the powder must be applied to not only the hen house cracks, crevices, bedding, nests, etc, but also to each and every chicken. ALL EIGHTY! So Hubby asked, "How are we supposed to treat seventy-five chicks?" I replied, "One at a time." I've got a plan. I hope it works.

Let's make it a pest-ridding week. I figure I might as well worm the six cats, four goats, and two horses.

The last time we wormed the goats was nearly fatal... for us! Fully grown, they are quite strong. I, being a 'townie', bought the first goat wormer I found. The labeled stated how much of the liquid was to be administered to each goat. Apparently, even though the goats love the taste of mud and dandelions, they abhor the taste of this pink liquid stuff! I'd love to have a video of Hubby wrestling Elvis while I scurried around them with the eye-dropper! I'm sure our 'country' friends laugh at us quite frequently.

I'm using a different approach this time... Turns out there's a pelleted form of wormer for goats. They're supposed to eat it like feed. You just pour the correct amount into the feed trough and let them eat it! Who'd a thought? I'll let you know how that turns out.

I mastered the cat meds long ago. When we had fourteen (oops) it was either learn a fail-proof method or be scarred for life! I tried the 'wrap-the-pretty-kitty-in-a-towel' trick. Yeah, right! Without resorting to duct tape, how do you keep the claws inside the towel? (It did qualify for my insurance to cover a tetanus shot on my next doctor visit.) Four hands were simply not enough to control to flailing limbs with extended switchblades.

What would a mother do? Isn't that a question we ask often when faced with a dilemma? So what does a mother cat do when handling her young? Of course! The scruff of the neck! Turns out it works, not just for kittens either. Now, whenever I have to give meds to any of the cats, I simply lift their front-end off the ground by the scruff of the neck. (Sqeeky Bear sometimes requires lifting his entire body.) They passively accept anything I stick in their furry little faces.

The horses can't be picked up by the scruff of their necks. 'Real' horse people do not approve of my worming method. Some meds must be administered orally, so teaching a horse to accept the wormer is a good way to keep them 'med-ready'. Mine aren't. Sorry. I do need to take the time to work on that someday. But for now, I use a wormer they like. It comes in a tube they don't like. So I squeeze the wormer into a little bit of grain and stir. They lap it up as long as I use enough oats & feed to dilute the taste.

So 'country folk' - go ahead and laugh! At least I have blog material!
Posted by Lillian Robinson

Thank you lilly for your comments on my blog,hope you come to india some day & witness a puppet show.It's always nice to read farm stories,my parents had the same problem with some chickens they kept and i think they used sweet flax ,dried & powdered &rubed onto the chicks,it helped.

The last time I gave one of my cats oral meds it was a total battle. The scruff of the is a good idea but that particular cat weighed 16 lbs so not sure.
My current cat hate her flea treatment, once again the scruff won't work as it has to be applied just behind her head.
SQ

I am laughing my head off trying to picture all this activity. Glad I only have a dog to worm. He eats anything so no problem giving him a pill. I love this blog so much. Years ago I spent my summers on my uncle' farm. I miss it. You are helping me relive memories.

You like my water and rocks, I love your farm and the farm life. You write with a great sense of humor and the warmth comes through. I've missed two weeks of blog following. Sheeesh am I behind!

Charmine - If I ever do make it to India, I want you to be my personal tour guide!

SQ - we've got a couple of big cats too... Chubbers came by his name naturally! I use the scruff to put the flea stuff on too

Rae - I'm glad someone is enjoying my agony! lol It is quite comical to see us trying to be farm people!

mk - Thank you. Some people don't recognize my attempt at humor. I love knowing that people enjoy reading what I write.