I have mostly good days anyway, but today was especially good!

I often complain about my camera... the third or fourth refurbished warranty replacement.I like the camera for over ten months. A minor defect was covered under the warranty. Wish I had the broken one back. I bought it because my old one had a broken battery door that I was holding shut with a C-clamp and it was kinda big. (HP 850) Well, big or not, it was a great camera, and today I fixed it! Now a piece of strapping tape will hold the door closed. (long story) You all were so kind to say that my pictures looked great, even if they didn't. These first two pictures will show you what I meant. They are both pictures of the same pear, both with flash. The first was taken with the refurbished camera; the second was taken with my antique huge monster camera. Tell me if you can see the difference. 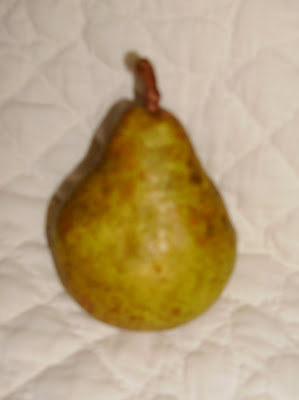 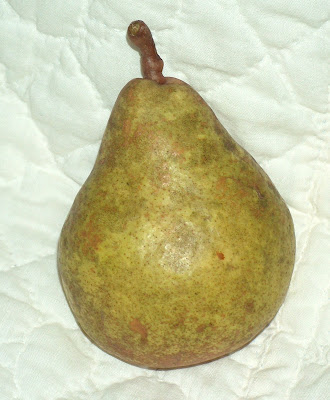 Which brings me to the second great thing today... my first pear of the season! Yes, this is from our pear tree. They are yummy. We don't get much fruit because we don't spray our trees. We savor the ones we get!


The third fantastic thing... Hubby couldn't wait for me to get home so he could share his news. His first green egg! They are so much richer than brown eggs. My favorite! The yolks are orange. I'll try to remember to take a picture of one cracked into a bowl. Half of the baby chicks were Araucacas or 'Easter egg' chickens. They lay colored eggs - a beautiful bluish green. 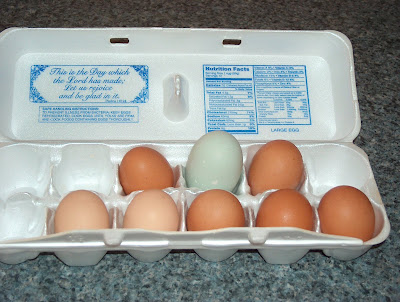 Check out the egg carton. It's what prompted me to fix the old camera. The other one wouldn't take a good picture with the writing in focus. We saved our old 'store-bought' cartons. I never noticed this before. It has a favorite scripture inside the lid! Let's just call that the fourth thing!


The fifth? I saved this for last. If you don't have arthritis or carpal tunnel, you won't appreciate this. At my two previous homes I had my favorite can opener. I was certain that I had taken it off the cabinet and brought it with me, but never found it. I've missed it for six years! I could no longer buy one locally. My FIL had one of those Pampered Chef openers that cuts the side so there's no sharp edges. It is difficult for me to use, plus you have to often crank it around twice to get it to cut.

I don't use a lot of canned stuff, so I never got around to replacing it until now. I found out that Ace Hardware had it online and would ship it to my local hardware store. Today, I used it for the second time! I love this can opener. There is nothing better on planet earth! I had the other one for many years. It stays sharp, cuts first time around, is easy on your hands and wrists, pops off and into the dishwasher, and it's 'green' for energy consumption! 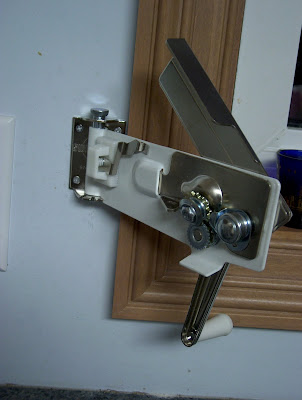 My Swing-away wall-mount can opener. Hehe... I just noticed in the picture... I never put the magnet thing in place. It's still stuck there on the back end where it was in the package! It hooks in and catches the lid. Oh well, think I'll go do that now...
Posted by Lillian Robinson 9 comments: