Keeping up with Ali

If moving the rest of the heavy stones in place wasn't enough! Ali brought her scooter up from her 'old' home and has been anxious to ride it on the bike path. So tonight we ate a light and early dinner and, after resting a bit, dug my bike out of the shed. I haven't ridden it in over a year. It's an old people's bike. When Hubby and I started riding, we shopped around for bikes with regular handlebars and big seats. We bought city touring bikes. Very comfy for us old fogies; and seven speeds are enough for me now. I'd rather go slower and enjoy the scenery. (no pain from bike butt)

Well, it seems I've lost a lot of coordination in the time since I last rode. Sadie wanted to follow us, so I pulled out my cell and called Hubby. I asked him to call to her, which he did, but she wanted to follow us. I turned around and rode back down the lane, across the creek where she could see Daddy. I told him to bribe her with food. He asked her if she wanted a treat and... end of problem! Or should I say beginning of problems...

I was sitting sideways across the gravel lane and began to lift my front wheel off the ground to turn my bike. Way too difficult a maneuver for me! I lost my balance and hopped sideways down the slope trying to regain my balance. All the while (like slow motion) I'm looking at the large chunks of rock waiting to gash my flesh. Somehow I managed to remain vertical, but still wounded my leg with the peddle... Just a minor cut, a big bluish lump and compound fracture of the pride bone. Fortunately, Hubby had already turned back toward the house and Ali was over the hill in the front. Whew! No witnesses! (somebody later blabbed)

So off we go. We live on the bike path, but it borders our woods; so the best route is down the driveway to the old highway. It's about 400 feet down the road. The traffic is pretty light since they built the new highway. We waited for a car to pass then took off down the road. Ali pushed her little legs as hard as they would go and we made it to the bike path before another car came along. We stopped to check out some really neat weeds.

When we were ready to ride, I put my foot on the peddle and shoved off, while swinging my other leg over the seat... the way I used to do without incident. OK, another bad idea. I didn't crash but it surely wasn't graceful! My bike turned across the path and almost went off the other side before I managed to regain control. More good fortune... It is a more remote section of the bike path and not heavily traveled. Only Ali saw this one. She understands Nana is old.

'It's just like riding a bike... You never forget." Don't people use that expression? What has happened to me? What if I open the pool this week and find that I can no longer swim?

My only saving grace was that Ali learned a scooter is not the best equipment for covering mileage on the bike path. She was worn out and ready to turn around at the first crossroad! Well, OK, if you insist...
Posted by Lillian Robinson 6 comments:

In the Out House (for women)

Everytime I behold this sight, I want to share it on my blog.
I'm asking you...
Could I make it any easier? 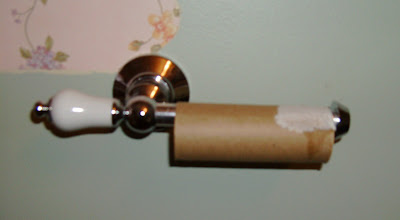 Grace in the Garden

Since I'm still 'under the weather' (I wonder where that expression came from) I don't have any new news to blog about, so here's a farm-fresh oldie but goodie...

She was trying to be a farm girl and bring in

a bucket of corn and green beans for dinner.

She is quite the drama queen!