This is a recycled post from last year when I was still a MySpace blogger.  I've always felt that Black Friday was in complete contrast to what Christmas is about; and what happened last year on Black Friday really pounds home the point...

It's Walmart's Fault the World Sucks! 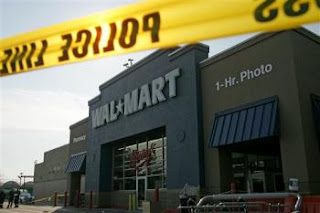 I guess by now, most everyone's heard about the WalMart worker that was trampled to death, while working the doors on Black Friday.  I don't know if it's been confirmed, but another witness said a young woman suffered a miscarriage in the crowd.  (later found to be untrue, but could have happened)  That was Walmart's fault, too.  And you've probably heard about the shooting in the Toys R Us store.  That was probably Toys R Us' fault.

In the Walmart event, the blame is for not having appropriate crowd control.  Are you kidding me?  So if I go shopping and they don't provide enough security, I can knock someone down, use them for a doormat and blame the store for my behavior?  And how can you possibly not feel someone's body under your feet?  Granted, the people at the front of the lines are probably not to blame.

I was in a crowd like that once, when some soap opera stars visited a local mall.  It scared me to death!  I had put a friend's daughter up on my shoulders to protect her.  It was only seconds before we were surrounded by a shoving mass.  A guy next to me was pushing against me so hard, he was twisting the toddler's let against me making her cry.  I told him he was hurting her, to which he replied, "Hey Lady, we want to see too."  OMG!  What kind of animal responds that way?  There were mothers using their baby's strollers to push their way through for a better spot.  Yes, the babies were in the strollers!  Luckily my friend and I were able to slowly work our way backwards and sideways into a music store where we took shelter until the crowd dissipated.  We were terribly frightened!  I understood what it was like in that Cincinnati rock concert crowd.  It stunned me how civilized people could act that way! 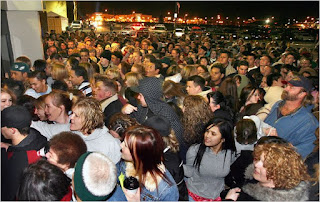 I haven't seen the footage showing the Walmart shoppers entering the store, but I'd bet the people in front had little control of their own movement.   When the first ones felt the body underfoot, they probably could do nothing about it.  We can't expect two or three decent people to be able to hold back a crowd of hundreds.  I can't imagine feeling a person being tramped by my own feet and not being able to stop and help them up and out of harm's way.  It would be a nightmare that haunted me forever! 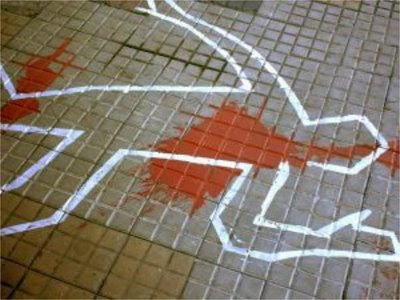 Personally, I've never participated in Black Friday shopping.  I've heard horror stories about how people grab things away from others.  Fights break out in toy departments.  The worst of human nature is put on display for the sake of profits.  Modesty aside, it is beneath me to act that way!  My own daughter came very close to being the only little girl in town without a Cabbage Patch doll for Christmas one year.  I wasn't about to fight for one!

So who is to blame in the Walmart tragedy?  For starters, the people who did the pushing!  It's a shame we probably won't be able to isolate the individuals that started the chaos.  They should be brought up on charges of manslaughter at the very least!  So do I think the retailers are innocent?  Certainly not.  But not just because of insufficient security...  I don't think it's entirely a store's responsibility to control the conduct of the individuals shopping there.  (Don't we know it's wrong to shove people?  Do we need a large police officers' presence to prevent this?)  But the retailers do cause the chaos by turning Christmas shopping into a race... a competition to see who gets there first. 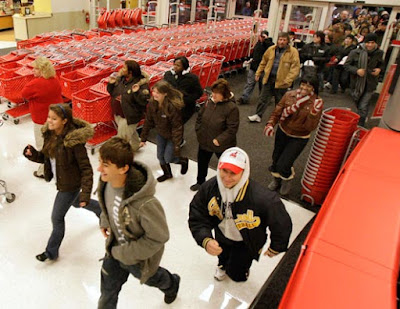 Lots of stores advertise a much-wanted item at a ridiculously low price, only to offer just one or two items at the price.  Whoever is third in line is out of luck, unless they can shove their way to the front of the line!  When did this start?  Why did this start?  Why not just mark a reasonable percentage off for that entire day?  Or how about everyone that makes a qualifying purchase that day is entered into a drawing for the dirt-cheap deal?  After all, isn't it about getting shoppers out spending money in their stores?  Not about selling that one hot item at 4 am?

I will continue my boycott of Black Friday, but it will have no effect.  There are too many people out there looking for that great deal.  Besides, I look forward to Thanksgiving.  I'm not about to cut it short so I can get to up at 2 am to go shopping!  Whatever it was that Walmart offered that morning, I hope the person that got it realizes it wasn't worth the price... 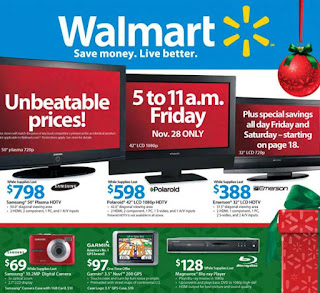