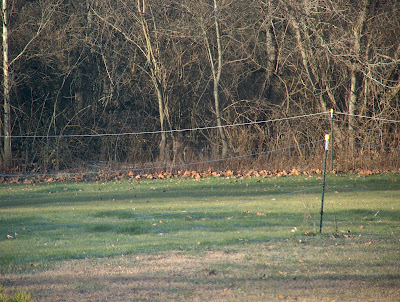 How about now? (click to enlarge)
That is Soldier.  (I think.  Mr J got a better look and says it is.)  He was named by my oldest grand.  A very fitting name, indeed.  You see, Soldier only has one antler.  At first, we assumed he had lost it in battle with one of the bigger bucks that inhabit the woods.  Now, I'm not so sure.  Year after year, he appears, each time having only one antler.  We have seen him every year for at least five years.  Somehow, he manages to escapes the arrows and ammo of the winter hunts.
Before all the electric fence went up for the horses and goats, we had quite a herd of regulars.  We used to put cracked corn down where the goat shed now stands.  It was a perfect view from the living room windows.  Every evening, after dinner, our routine was to clean up the dishes, and then sit and watch the deer come out.
The most regular visitor was a young doe named Cookie, also named by the grands.  (Get it?  Cookie Doe?)  Every day, without fail, Cookie would come for her evening meal.  She didn't mind that we came out the door and yelled hello to her.  She would look up at us as we made our way across the porch to the chairs, and then return to her food.  I don't hunt, but I'm not opposed to hunting.  I do imagine, however, than any deer bagged in this area is certainly not one of ours!
We see glimpses of deer quite often in the wood line.  Occasionally, we see them on this side of the fence, but mostly they stay in the front pasture.  After a rain, when the ground is soft, we see enough prints that it looks like the deer path hub out here.  We actually have a place in the woods were several of their worn paths cross.  Before the goats cleared the brush, the only way through our woods was using the deer's paths.
It's hard to say if Cookie comes back now, as she has no markings as distinctive as a one-antlered buck.  But, if you're a hunter, before you pull the trigger on that bow, see if she answers to Cookie.  And if she does...  Please, send her home.
Posted by Lillian Robinson 9 comments: