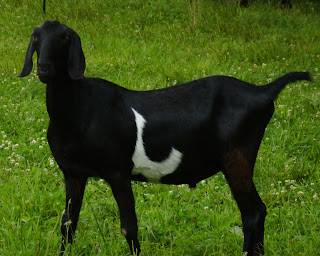 No sooner had our grief for Buddy eased to
bearable, than Mr J noticed Oreo wasn't acting right. 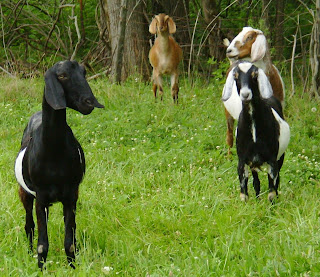 Normally, Oreo is the leader of the pack; but on this day, the others were in the pasture while Oreo was standing alone behind their house.  That never happens!
Goats have a tight herd.  Even when Elvis played the loner, he was never more than 15 feet from the others.  When the leader takes off for the woods, the others will stop drinking to follow.  That's just their nature.
Oreo developed respiratory symptoms.  I injected him with antibiotics for a few days, and those symptoms improved, but Oreo didn't.  He grew weaker.  We've been told that goats are a lot like chickens... when you notice they're sick, it's usually too late.   That's proven true.  We started with six goats.  Lost one.  Gained another.  Lost two in one year.  Now Oreo. 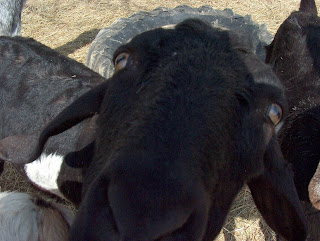 Oreo was probably Mr J's favorite goat.
He had a funny personality...
always first to investigate
current happenings.
(Whenever Sadie entered the gate,
the others would hide behind Oreo,
leaving him to determine the danger.) 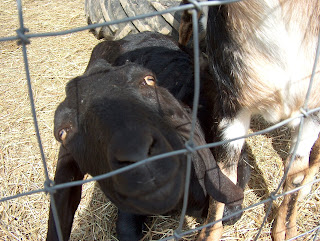 This past Sunday, two-and-a-half weeks after we buried Buddy, we buried Oreo.


His grave is next to Willie's.
Rest in peace, Oreo.  We miss you!
Posted by Lillian Robinson

Lily, I'm so sorry for your losses. Like old friends, you and Buddy and Oreo have been through a lot together, and saying goodbye is never easy.

My heart goes out to you in your grief, and my thoughts and prayers are with you.

Lily, I am SO SORRY to hear this. I have enjoyed your stories of Oreo's antics and think it's just so sad to have lost another wonderful companion. I am praying for you and your family.

How hard this had to be on you. I'm so very sorry.

I am so sorry. My heart hurts for you.

Oh my Lily! I've just read your two posts, and I'm so sorry!!! I hope things take a turn for the better, so many losses one after the other just feeds the pain... I hope the other critters help you find some solace.

On another note, so glad to see you posting!! Have missed you! ~Janine XO

Hi Lily,
I've not been able to stay up to date lately, and I'm now catching up. But I'm so sorry to hear of your losses! Losing a pet of any kind feels just like losing a family member. Non-animal lovers probably don't understand this, but I do. I wanted to cry reading your post. I hope the third is not to be!

Oh Lily ~ I am so sorry to hear this. We had goats and loved them like our babies. They are so loving and funny that you can't help but mourn their loss. I hate that you guys are going through all this loss.

Lily, I am so sorry to read of your losses, my heart just breaks. I know how much you loved these dear animals. I read how Nekoda looked for Buddy for days. When my beloved dog Sheldon passed in June, my cat Mae wandered the house at night meowing and looking for him. She even took to sleeping in his BIG ol' bed. She had always had other pets in the house with her and I knew she was extremely lonely. I finally sent her to live with my daughter, who has three cats (including Mae's brother) and two little dogs. It took her about a week to adjust, but she settled right in with her new family. I missed her so, but I'm here visiting now and it is so nice to see her happy and content again.

I know how hard it is to adjust, I still cry over Sheldon and still haven't adjusted to life without him. You've written so many loving posts about your animals and I know they had such wonderful lives. May they be at peace and your heart mend. Hugs.