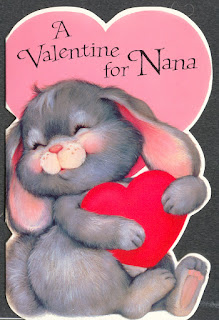 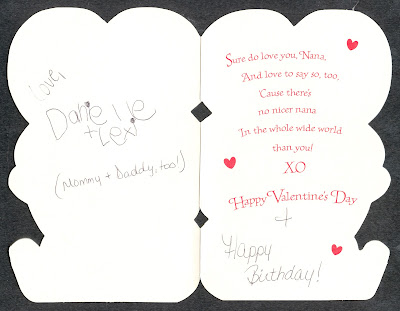 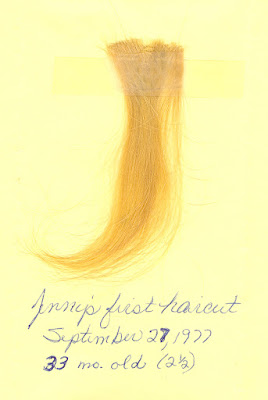 Might as well show you the lock of hair, too.
The tape wasn't yellow back then, but the hair was.
Actually, it was a beautiful strawberry blonde.
It's straightened out a little over the years,
but she's still my little curly top!
Posted by Lillian Robinson

The Valentine/Birthday card is so sweet, even better since the girls signed it themselves. I hadn't thought about scanning things like cards, that is a great idea.

This is a fun meme but I just did it so I'm going to pass this time.

Good to have you back, I figured the little one was keeping you busy.

Lily,that's so sweet of them and such a cute card.I couldn't view the lock of hair pic...not opening. Congrats! When do we get to see pics of your new grandson?

Who me? Oh no...I have been tagged! That's a different one Lily, how sentimental of you to keep those cards in your folder. How nice!

How absolutely adorable! How old is she now? I love the way kids write when they're learning... you are such a good caregiver, and it seems you've been doing it a long time now.

could you hear all the grandmas say "awwwwwwwwwwww" all at once? so sweet.

lily, don't worry about posting. you've got important things to look after!

we'll be here & keep checking in.

What a lovely post!!! And don't worry about all of us...just take care of you and your grandson! We'll be here! Love you! Janine XO

This is so sweet, Lily. I save them all. My fridge looks like a bulletin board.

I am watching my granddaughters everyday now. How lucky are we?

Just here to send you my love, and wish you a wonderful week! ~Janine XO

I remember signing Mother's and Father's Day cards for my sisters when they couldn't write... come to think of it... I still do!!! Since I'm the one at home for the moment and they're scattered. Some customs are never lost.

I enjoyed your blog. Very insightful
Here's one you might appreciate
God Bless, bob West
http://westbob.blogspot.com/2010/04/line-upon-line.html