Their Feud is Over

My Uncle Frank and Aunt Marie are wonderful people.  I remember when I was very young, we would go visit them once in a while.  Frank is my dad's oldest brother.  His baby brother John and his sister Mary Julia have both passed on from this world.  That leaves Frank and Dad.  Only Frank and Dad don't speak.  They haven't been on good terms for over forty years!

My dad's side of the story... well, it's really not important.  Let's just say it's one of those 'when a parent dies and has stuff to leave behind' kind of situations.  Yeah, Dad felt like he got ripped off.  I don't really know all there is to know, so I can't really say he's wrong.  I just know there's a whole lotta stuff around his place that belonged to my grandfather.

What I do know for certain, is that my grandparents' hearts would be broken.  I guess it's one of the blessing of having an only child...  sorta...  I hope I never see the day that my daughter will be not speaking to Mr J's son or daughter.  It means a lot to me to have them all together. 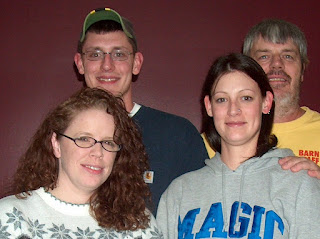 Today, their feud is over.  My Uncle Frank passed away this morning.  He had been going down hill for a while.  We urged Dad to call him.  He had nothing to say.  Sad.  He lost his brother years ago, and now, he will never again have the chance to get him back.
Posted by Lillian Robinson

I've seen this sort of thing more times than I care to have. I've seen it and experienced it in my family over (to me) the silliest of reasons. I've told my son and daughter more than once that they need to stay close - after their dad and I are gone they'll only have each other. Well, they'll have cousins but in today's world where divorce is very common and the way everyone moves around so much cousins have a way of losing contact with each other. I find that very sad. I remember the family reunions I went to as a kid and all the fun my cousins and I had playing together for a day or two every year or so. My own kids have cousins they haven't seen in years. Like I said, it's just sad.

Oh Lily. How very sad for all of you. Everytime I think of choking my little sister, I remember, our time is already so short. Bitterness is just not worth the price for me.

It is so very sad. You know the hardest thing to do in life is to love someone who is unloveable. It's only by grace that we can do that.....

You are all in my thoughts and prayers....

I am sorry for your loss. It makes the grief even harder when there are family lines of separation. How well I know. It is nice to see your kids together though.

Sorry to hear about your Uncle Frank, too bad the circumstances couldn't have been different. I've seen similar incidents in my own family over the years.