A Beautiful Day to Fall in Love

What have I done?  I knew better than to tempt fate.  I tried to keep my distance from him.  I thought that since he was moving soon, I was safe... I could let down my guard.  I let myself get close to him and now I can't let go. 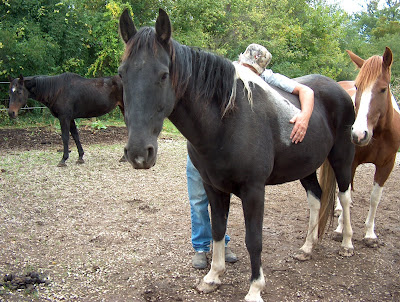 I never rode Buddy before; he is Hubby's horse.  The first time I got on him was just for a minute to see how he acted after not being ridden for so long.  I didn't want to post an ad for him until I made sure he was still good under saddle.  He was his typical sweet self.  In less than 24 hrs I had him sold to a really good home.

Today was so beautiful!  I was really enjoying the outdoors.  I took the mares out to the front field, and kept Buddy in the back.  I figured he might as well get used to being alone.

After they grazed a while, I brought Nekoda, my spotted mare, up to work her in the round pen.  Then I rode her for a few minutes before I took her back to the pasture.  I don't know what got into me...  I decided to saddle up Buddy and work him for a bit.  Then I climbed on...  He was so good.  I directed him to the gate of the round pen.  I thought if he would line up for me, I'd open the gate and we'd ride out into the yard for a bit.  He was perfect.  We rode around the house, and then I turned him toward the lane.  We crossed the creek and headed to the fields.  I fell in love.

Now I've got to call a man tomorrow and tell him he's not getting a horse...
Posted by Lillian Robinson

Uh oh. I understand and I hope it all works out for the best. You are going with what is in your heart and that is the best sometimes.

Wow Ms Lilly, your blog made me feel like I am reading a bestseller! Nice to see them again.

Wow Ms Lilly, your blog made me feel like I am reading a bestseller! Nice to see them again.

Wonderful news and I am happy for all of you; Ray and the horses. You are a family and it would hurt awful to break it up. They are looking good out there. Does Maggie always shy off by herself? Nekoda sure doesn't let space get between her and her friend. I really like the new sidebar additions.

Yey for Buddy!! A happy ending for sure.

a happy beginning of a new chapter I would say!!!
things really get in shape in a fairy tale manner isnt it?

I loved reading this. I am so happy you are able to be outside enjoying the lovely fall weather, and riding your new beau. That man can find another horse but you will never find another Buddy. So happy for you, Lily! And Buddy....AND Ray!

Oh, Lily (although I notice that you have become Lillian, should I call you that?). I totally understand. Now as I remember the reason for this was the cut in pensions. As long as you don't cut your internet connection, I'm so happy to find that Buddy will stay with you...

Just looking at that sweet face I can see how easy it would be to fall in love. Like Lille said, the man can find another horse .... there is no other Buddy.

I'm so relieved that Buddy is staying. I was always partial to him. He is the sweetest horse and the only one that I ever loved nearly as much as my Closer. I'll have to make sure to give him extra pats and maybe an apple treat next time I'm up!