That's what Hubby calls the farm... Well, that's what he calls it for the present time. First it was Triple Creek because technically you can count three creeks. Then he called it Crooked Creek. I liked that name. We have absolutely the most winding creek you ever saw. You probably cover several miles if you walk it vs 1000 feet as the crow flies. It flows all four compass directions! Depending on his mood, he's had many names for the place. Someday I'll paint a sign.

Anyway, today he picked corn with his dad. Good corn! Last year he switched and planted some type that didn't have as much silk, so was easier to husk. Yeah, so! It didn't have much flavor and the kernels were tough. Now that he's back to growing Golden Jubilee, I can speak to him again. A lot of people love Silver Queen corn, but not me. He used to grow both... Golden Jubilee for me, Silver Queen for himself and his folks. However, when I'd cook the Golden, they'd all remark about how much better it tasted. Well, yeah... That's why I like it.

They're not finished picking yet, but there's already over a hundred ears in the freezer... and we had some for supper tonight. Here's a picture of the corn from the kitchen door. They're in there somewhere. 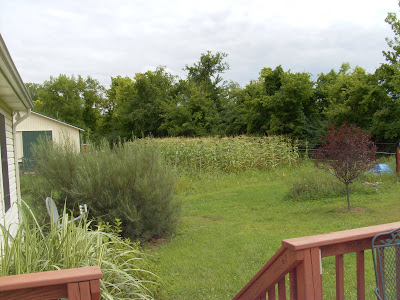 They didn't do as much weeding this year as normal. There was quite a bit of morning glory vines growing through the corn. This ear had a vine wrapped around it as it grew. Makes for an interesting pattern. 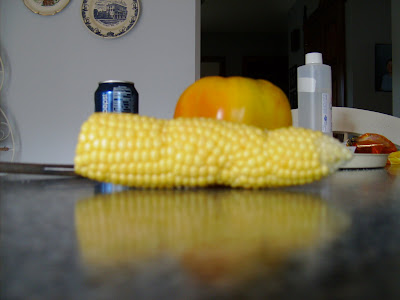 I thought I'd check on the Tennessee Muskmelon patch. Hubby raises them in a raised bed. (Pardon the pun.) Sadie decided to inspect them a little closer. These melons grow oblong, like a watermelon. The strange weather we're having might interfere with the melon harvest. 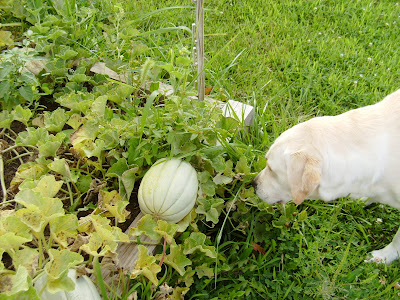 Today was a beautiful day for stretching out on the deck for a little sun. That's what Little Bear thought anyway... 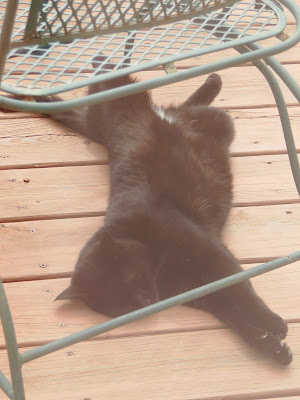 Here is some vary rare footage. Chubs and Squeaky are partners in crime (chasing off Mickey), but I've never seen Chubs do this before...

Lily, let me tell you once more how much I enjoy experiencing your farm through your blog. Corn and cats, and goats in the rain and especially Sadie, the dog from Heaven. I am so blessed to be one of your followers...

What a beautiful farm you have. On top of horses, dogs, and cats you have fresh corn and everything else! Your post made me hungry!

The corn looks delicious. People that live outside the Midwest have no idea what they are missing. There is nothing quite like fresh sweet corn.

Sadie is such a typical lab - nosy just like mine.
What a life! The cats have it made don't they? Just lounging around and getting groomed.

You should all come to dinner tomorrow! We'll have fresh corn, sweet potatoes, green beans...

I just realized... In the video you can here the microwave beeping and the pressure cooker steaming. Dinner's almost ready!

What a peaceful place to live. Ahhhhhhhhhhhh.

The corn looks so good and fresh. I can't wait to get some from the farm stands around here.

I am now so envious with your farm, you got everything there! Does Sadie inspects all the fruits to be harvested? When I look at the corn I thought about grilled corn with butter spread over it...hmmm.

hey Lily your post was so niceeee as I have said before I feel like living in novel through your warm posts thanks for taking time ou and sharing it with us!
love Naqvee

Oh.. what a very precious farm you have, thank you for letting me explore your farm through your blog.. I really enjoyed it.

have a nice day!

Thank you so much for your warm welcome back!!! I am so lookinfg forward to catching up with everyone!!!

Chat with you soon!!!
XOXO
Cathy

I agree with you about the corn. I really prefer the corn that tastes more corny and not so sweet.

Loved the pics of farm life. I live life on a farm through you.

I remember something about sugar or sweet in the corn we used to raise. 100 ears is a good thing. Now I'm hungry for good muskmelons too, thanks for sharing.

Hi Lily,
thanks for dropping by my blog.

have a nice day!

What a beautiful site you have here, and I thought I should leave a comment for you. Lovely interesting posts and great pictures too - thank you so much for sharing. Happy Mid week... best wishes