Remember that little rock steps project that Ali and I did? After we laid the rock, we landscaped beside it, underneath the steps to our balcony. One of the plants we put in that bed finally bloomed. My 3rd refurbished camera sucks, (do you hear the dissatisfaction in my voice?) so the color is off. The blooms are a very deep pink. I'm waiting to see if the whole spear ends up turning pink. I don't know if the pink part started out that way. We've had so much rain that I've not spent much time out there, and these little ones surprised me! 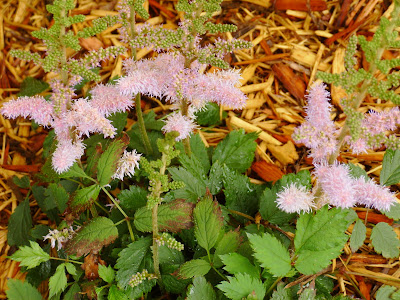 I don't remember what these are... I just liked them when I saw them at the nursery. The shot below makes me want to call them starfish flowers... 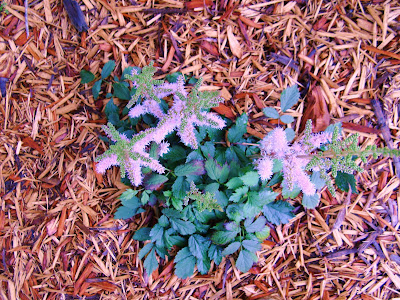 We've had Sadie for well over a year. I've tried and tried to capture this pose with my camera, but she always wakes and looks straight up at me! I was determined... So last night, while she was making those little 'I'm in such a deep sleep' noises, I grabbed my camera and voila! 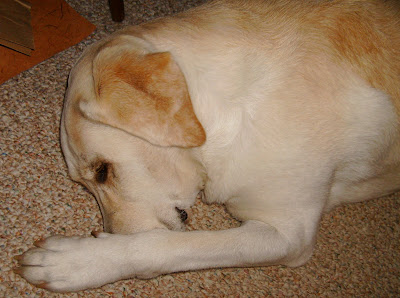 She always covers her nose with her paw when she sleeps. Could this be why she makes those noises? 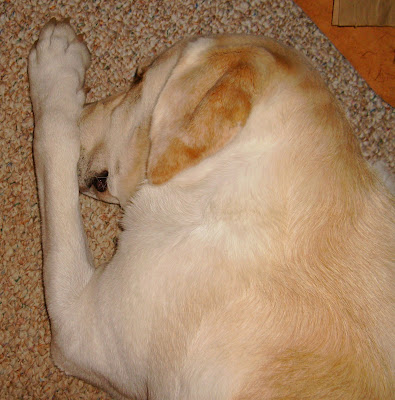 The baby chicks can no longer be called babies. It won't be much longer before we start getting eggs from them. Hubby has a portion of fence between the babies and the older hens' areas that he uses as a gate. Well, last night he not only forgot to shut it, he also forgot to shut the little back door on the big house! When he got up this morning there were dozens of young hens over in the the old hens' grass. They're used to him bringing food and calling them, so he just hollered to them. Sure enough, they came running through the gate back to their own neighborhood... except for one... All of a sudden one of the young hens took to the air, flew over the fence and landed in front of him like, "Here I am." He wants to know why he's got the fence.
Posted by Lillian Robinson

The flowers are pretty. Sadie is adorable. Except for the lack of a collar I would swear I was looking a Piper. That is so funny that the chicks come when your husband calls - almost like dogs.

The flowers are lovely. I'm going to follow you closely on the chickens. I'm mulling over getting some.

Sadie looks like our Luc. Luc has a couple of health problems which we've been dealing with this past week. Labs are so goofy and bring so much enjoyment into the day.

Love your flowers, I need to plant some more. Sadie looks so sweet, it's funny she covers her nose when she sleeps, I've never seen that before. I guess you could call your husband a "chick magnet" huh?! :)

Sadie is so beautiful, that is kind of funny that she sleeps like that. I love the way you photographed the flowers, they look really cool from that angle. I don't know what they are. It seems like just yesterday the chickens wouldn't come out lol. How fast things change.

Awww look at Sadie, she looks so sweet I wanted to feel her coat, and hug her. LOL I thought your hubby would say "SIT" to the hen LOL.

I remember when you planted the flowers, look at them now they are so pretty.
Sadie looks so sweet in those photos, she is a very pretty girl.
Everything is growing up plants and chicks. The summer really is moving fast.

We had a yellow lab once that looked much like Sadie. They are very good dogs.

Your flowers look beautiful! I love the starfish flowers. Great picture of Sadie! She looks so cute with her paw over her nose :-)

Hi Lily,How lovely those flowers look,i like the star fish flower.Sadie looks cute in that pose.The hens made me laugh.I'll be back soon.

She is adorable. Our Lab, Lucy, snores. Loudly!