Well, it took them a while, but the chicks are finally using both their brains and the door. Now, instead of standing in the opening looking at the great beyond, they actually go through the door and down to the grass. Yea! And they've learned to go back inside before dark. It's a milestone. It's the equivalent of your toddler finally going number two in the potty! Daddy is proud. I'm sure if they hadn't been evicted, they would still be standing there, gazing out at the strange green stuff.

Do you suppose they are agoraphobiacs? If they were raised outside, would they be afraid to go in? I wonder if there are other animal species that fear the big world.

I remember the first time our goats saw snow... We had five that we raised from babies. They stood packed together in the back door of their shed staring at the white stuff. One of them finally stretched a foot over the threshold. Woah! What the heck is that stuff? You sink in it! It was fun watching them test it over and over until they finally summoned up the courage to brave it. I don't remember now how long it took them to venture out, but chickens, if you're reading this, it was the SAME DAY!

The four laying hens we have were several months old when we got them, so they were already accustomed to the outdoors. They are over a year old now. Hubby says they have to be kept separate from the young ones until the babies get bigger. In an earlier post I mentioned how the house was divided. When the chicks got too big for their small corner, Hubby moved the grown hens to a separate house so the babies could have the whole big house to themselves.

Hubby's first wife's father (now deceased) built bird houses. That's what I'd always been told. Bird houses. Those cute little things you hang from tree branches, right? Nope. We're talking big bird houses! When Hubby got ready to have chickens, they gave him one of the bird houses. That's where the hens live now. It's big enough for probably a dozen hens. He was quite the craftsman. Hubby added the little chick door on the side, the ladder, handles and wheels. It's a mobile home for chickens! 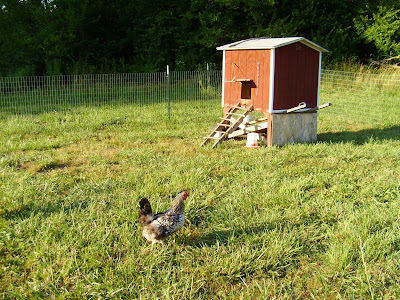 It's hard to believe that, in another three months or so, the fifty new hens will be laying eggs. I guess they can all live together peacefully by then - the young and the old. That will be fifty-four hens laying eggs every day! Does anyone out there have any egg recipes they'd like to share?

Oh yes I have many recipes with lots of eggs. Sponge cake requires many eggs, and my Mom's old recipe for kolatches. I could take a drive down and buy some from you. It seems like a long commute for eggs but I could meet you and Sadie and Maggie and well everyone. Sounds good to me, how much per dozen?

I just dont understand why it's complicated to post comments nowadays. Im going to retype my comment.

If each hen will gonna lay 4 eggs the minimum, how much eggs will that be?

And did you get the idea of the hen's house from the bird's house?

Wow, that's a lot of eggs! You could feed an army everyday! The hens look like they have a great home and lots of yard to run around in. I enjoy your stories!

one of the staples of Spanish cuisine, perfect for appetizers, a buffet, a picnic or a lite supper!

The basic one is Tortilla de Patatas (potato omelette). Kind of depends on the size of frying pan you have, but I'd say start with a medium tortilla, go with 4 medium-sized potatoes, slice them up into small chunks (all more or less the same size so they cook the same) then fry them in some olive oil (or vegetable oil) but get them out of there before they get crispy (you want them just slightly cooked). Then you put them in a bowl (without the oil!) where you've beat up 5 eggs (1 per potatoe plus one more) and mix them together. Now's the tricky part, if they don't look like they have enough liquid add an egg (unfortunately that's a trial and error process). Then pour the whole thing into a non-stick frying pan lightly coated with oil and when the edges of the omelette start to peel away from the sides and the egg isn't so liquidy use cover the pan with a plate, flip it over so the 1/2 cooked tortilla is sitting on the plate, then slide it back into the pan to cook the other side (low fire). Usually a couple of minutes per side.

Thinner omelettes are dryer, thicker are a bit squishier, more runny (my preference).

Chopped onion can be added (there's a big philosophical discussion as to wether tortilla de patatas has onion or not, most people do, I don't).

Then you can vary that by putting in less potato and adding in zucchini or spinach or other veggies!

Good hot or cold, with a slice of baguette and some fresh tomatoes... yum!

Finally those birds did something smart. You are definitely going to be eating lots of eggs.

I like the mobile home for chickens. Just don't move it. They will never find it.

I love this description of how the chickens came to love the outdoors. But best of all was imagining the goats learning about snow! Thanks for this update, Lily, my curiosity has now been satisfied. I do wonder, though, if you are going to be selling those eggs, because you sure can't eat 'em all, even with some of these great recipes. Thanks for sharing this.

Anne - Don't forget to use your blogspot discount card!

Al - Each hen lays one egg per day most days. Somedays they skip. We did have one day where one of our hens laid two eggs! It's not really a big income. We hope to sell 3-4 dozen a day. That will pay for their feed plus give us fresh eggs.

Cris - Hubby is a potato man. We will love that recipe!

Kris - It's a lot of chickens too! I'm glad you enjoy reading about our farm. I love writing about our adventures.

Rae - We've already discussed the stupid chicken thing... The grandkids love the eggs. They didn't like eggs until they tasted the difference!

Did you know that in Chinatown in NYC there was/is a chicken that will play tic tac toe with you and always wins! A bit of corn is her reward.