I had planned I had planned on having my first Brandywines of the season last night for dinner, but I had my plate full before I remembered them. Hubby had them sitting on the deck railing. Out of sight, out of mind! So I had them for lunch today. Summer is about the only time I eat tomatoes. I don't like the ones you get in the grocery store or in a restaurant. If they're not vine-ripened, they don't taste the same. Have you ever bought a tomato from the grocery that looked like this? 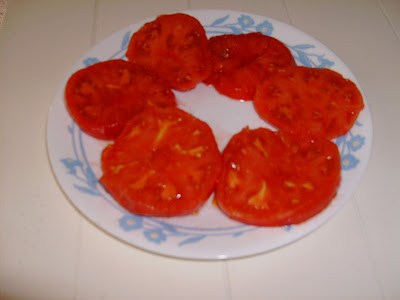 We went to the bonfire last night. I saddled up Maggie to ride over. I didn't think she'd cross the creek (on the driveway) because she's so barn sour. I left her lead attached to her halter in case Hubby had to make her walk across. I wasn't going to spend time going in circles. He walked beside me and headed for the front field. I couldn't believe it... Maggie walked right across behind him! I didn't have a single problem getting her to leave the barn area. As long as Hubby walks with me, I can get her out in the fields.

The neighbor that had the bonfire doesn't live there yet. He's renovating. This farm house was built in the early 1800s and has quite a history. It has over 6000 square feet! He has pretty much gutted the place as far as walls & ceilings. He basically has a shell to work with. He wants to get a few rooms on the first level done by December. They are expecting their first child in January and want to move in before the baby comes. He's got a lot of work to do! This is what it looked like when we first built our home here six years ago... 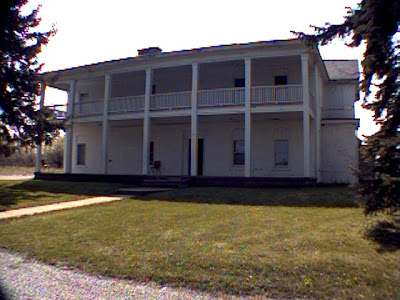 He has removed most of the white paint and brought it back to the red brick. The upstairs porch had collapsed on one end by the time he bought it. He has repaired that also. It's really looking awesome on the outside.


There is one property between us. The man that used to own all this farmland owns the field next to us. He built a barn on the front part. It also has a greenhouse that the former farmhouse owner put up for his wife. (He was buying that property as well, but lost it.)

This picture shows where the farmhouse looking from our house. We can only see it in the winter when the leaves are gone. If you look closely, the farmhouse is circled in red and there is a red X behind it where the bonfire was held. It doesn't look that far away, but walking uphill through the long grass and weeds in the field is quite a trek! It will be nice to have neighbors again. 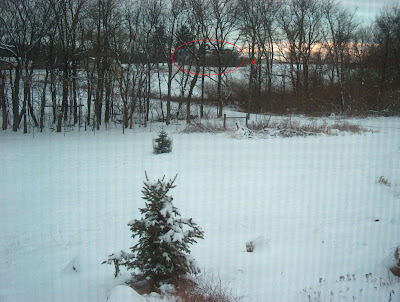 Ali came back this afternoon. I'm going to go bake some of those orange danish rolls she loves.
Posted by Lillian Robinson

I seem to have a brown thumb when it comes to tomatoes but this time of the year we have a lot of local growers. They are so much better than the ones in the store.

That is a magnificent house, can you just imagine it in it's prime. What a great project.

Oh my... bonfires, nice neighbors, Ali, orange danish rolls, sweet farm house, and Maggie. All wonderful things--just like you. I am drooling just thinking about the orange danish rolls... Now that would work for me just fine. Recipes??? [smiles ever so hopefully]

I don't think those tomatoes could ever be imagined to come from a store. I can almost taste them, they are so good looking!! And I'm glad for you that you will have neighbors soon...

I am drooling for those tomatoes. I just bought some crappy store tomatoes out of desperation. I hope they were yummy.

Yum,
I wish I was at your place for those tomatoes. Just give me some tomatoes and salt and I will have a meal.
My daughter has been craving fried green tomatoes. I like those too. Now I will be on the search for some homegrown tomatoes.

Fried green tomatoes? All I know about those is the title of a wonderful movie! :p

I seem to remember my Grandfather had tomatoes in his chalet 20 years ago... so I must have eaten some. vague memories...

Lovely tomato. I'm sooooo jealous. It will be a while before ours are ready as I started the seeds way too late.

Boy oh boy!! You know how to make us all drool don't you?! Wish I was visiting you, yummy!

Nothing beats home grown,they look delicious.I love all things country,and i wish i can live in the country some day,it is so peaceful and green all around.Every one at home loves country music,cowboy movies,you are so fortunate.That house project seems huge.
Glad you will have company soon.Orange rolls for Ali?I want some too please.

Have you ever heard of the mortgage lifter. It is an heirloom tomato. Absolutely delicious! When a tomato is really good, I have tomato sandwiches, bread, salt, pepper and mayo. Yum. Very juicy image.

I couldn't agree with you more about tomatoes. They seem to be getting worse and worse. Even the very expensive heirlooms aren't that great.

Wow, that farmhouse is amazing. So cool that you could ride your horse over.