Congrats to Dani a.k.a. Grand #1!
Today she became an 'official' member of the Thespian Club.
She has been performing since she was a baby. She sings for her church, and school. Last year she starred in Guys and Dolls. She won two awards tonight for her performances in two one-act plays put on by the drama department. One for best supporting actress and one for best female minor role. She felt very honored because these awards are voted on by the students! 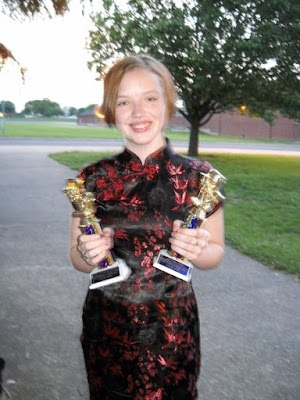 Someday at the Oscars...
"I would like to thank Nana for always being my biggest fan."
Posted by Lillian Robinson

Congrats. Great job. I am sure you are very proud.

She is so pretty, I know you are very proud. And not one award but two, wow.