Well, maybe... we'll see. It was pretty rough going into the chicken house today. Hubby keeps it super clean, but there are a lot of chicks! As much as I love fresh eggs and being self-sufficient, I want nothing to do with the chickens. I have a medical situation that dictates I should not be spending time in a chicken house. 'nuf said. And Hubby is not one to pick up a camera. Once they are old enough to go outside there will be more pictures, but for now... 0n to the comparison shots.

The top photo is one from April 9th - our 1st day. It's not the greatest, but I wanted to include the gallon waterer to give scale. At that size, they could have used the lip as a bird bath. They were no wider than the trough. The 2nd photo I shot today in the chicken house. That makes them 5-1/2 weeks old. Also note that in the 1st shot the waterer is sitting on the shavings and in the 2nd shot, it's up on large bricks. 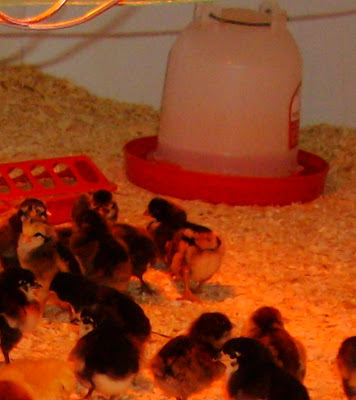 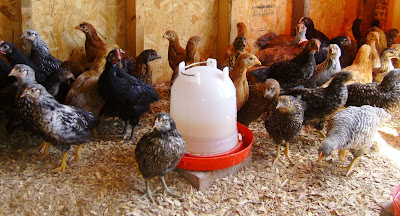 Oh my gosh. They grew so quickly. My hubby grew up on a farm and raised chickens. He loved the critters until it was neck wringing time. Yuck. He also raised pigs and thinks baby piglets are so sweet. They may be cute but there is nothing worse than pig farm smell. ICK!!!

They have grown fast. I remember my grandmother raising chickens, the hens were neat but, and I was probably three at the time, I was scared to death of the roosters.
The gray one on the right side of the bottom is really pretty.

Oh my gosh they have grown!! How pretty they have become.

You have an award waiting for you at my photo blog, http://thrusquirreleyes.blogspot.com/
Come over and pick it up.
SQ

Pretty cool to compare the photos and how they have grown. Does anyone know if you could have a chicken as a pet? Just curious ...