Like most girls her age, Grand #2, my eleven-year-old granddaughter, is crazy about High School Musical. She even has two pink, fuzzy, HSM throws - one at home, one here. She has T-shirts, posters, etc. So last year when I made my reservations for my season tickets at LaComedia, a sorta-nearby dinner theater, I bought an extra ticket for her to go with my BF and me to see their production of High School Musical. She adores my BF and was really looking forward to going... just us three ladies! 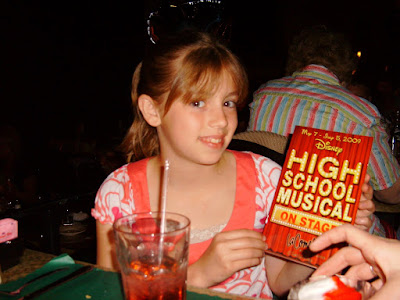 When I made the reservations, I didn't realize the date I picked was Mother's Day. Sadly, my BF's children made plans for her so she couldn't make it. Hubby wasn't up to sitting for that long with the physical impairments he's suffering lately, so I decided to take Grand #3, the almost-five-year-old, with us. She is also a big HSM fan.

I came close to chucking the whole plan! Grand #2 can be a difficult child and this weekend she tried to break her record on how many times she could get in trouble. She pushed me to my limit and I finally told her that I was seriously thinking about leaving her at home because I truly do not believe in rewarding bad behavior. She adjusted her attitude just enough... 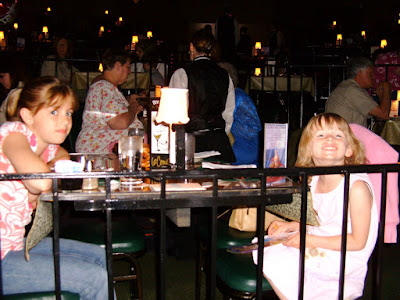 We had perfect seats! We were center stage, one level up and one table back from the stage. She had a spectacular time! The tuxedo-cloaked host had fun teasing her and even gave her a sweet, faked-for-the-camera kiss on the cheek. 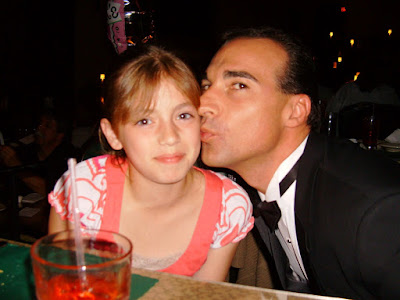 She got autographs from over half the cast while I snapped photos of her with the stars. One of the ensemble members was in a local university's production of 'Children of Eden' with her last year. He, along with some other members of the cast had already headed back stage by the time we got through the line on the right; so the host-with-the-most took her program backstage for some more autographs, including the guy she 'worked with' before. We were probably the last patrons to leave the theater. #2 was quite happy as I jumped on the interstate and heading to their house. This was a magical night for her... so far.

We got to their house well past bedtime. Both girls were bubbling about the show. #3 laid claims to the new 'boyfriend'. They were far to energetic to be sent to bed!

Then Mommy had to relay the news... It seems that sometime over the weekend, Ruby, #2's guinea pig, had expired... kicked-the-bucket... DIED!

All the excitement that had filled the room seconds before instantly vanished. She only got to bask in the magic of the evening for the twenty-minute drive home. Life is so unfair.
Posted by Lillian Robinson

What a great evening for the girls and you, sounds like everyone had a fantastic time.
Real bummer about the guinea pig however, my condolences to #2 on her loss.
SQ

Oh,The roller coaster of life. It's amazing how those plunges happen so fast. Thankfully it will go back up.