Rubbing off on Hubby

Normally, Hubby rolls his eyes like a preteen when I pull out the camera. Although, most of the time it's just an act. (Once when his family was over and out came the memory-maker, he made an 'oh no' statement... I said, "Fine. I'll put it away and not take any pictures." He quickly back-stepped!) He rarely suggests that I grab my camera unless there's a beautiful sunset... and I already have tons of those shots.
Anyway, back to my story... I had some huge planters for the front porch and, since there was a break in the rain, was in the process of filling them with the annuals I bought today at the nursery. So Hubby, while standing in front of my weeping pine, says, "Man, this would make a great picture. Why don't you get your camera?"
Well, of course I had to see what would make him want me to pull out the camera. SquirrelQueen ( http://thrusquirreleyes.blogspot.com/ ) would be thrilled with what we found perched on the new growth... 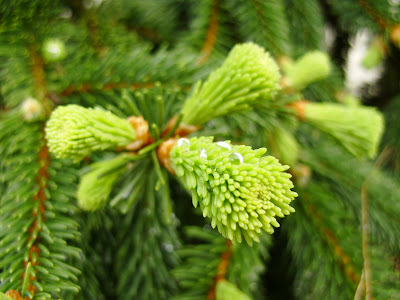 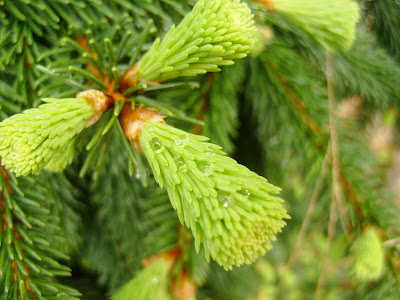 Raindrops clung to the buds appearing as rhinestones. 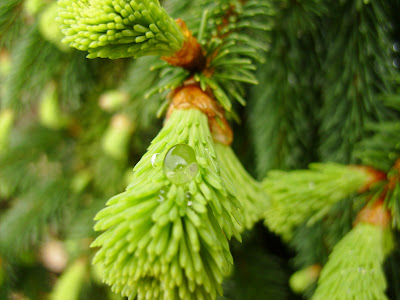 This huge droplet was perched at the perfect spot for our observation. 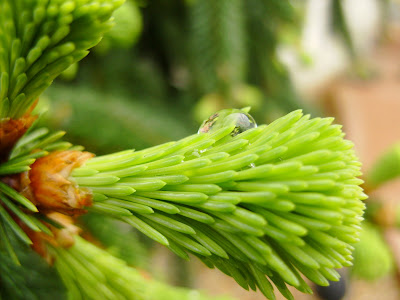 If you look closely at the shot above and below,
you will see the reversed reflection like that of a gazing ball. 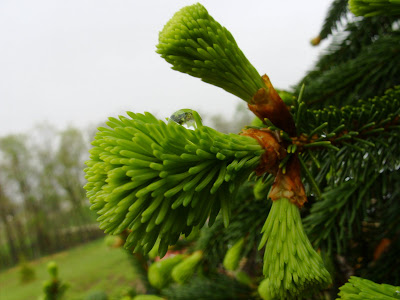 I'm so proud of Hubby for noticing the tiny droplets in his six-foot-five world!
How about you SQ?

Wow, and again wow! Those are great shots. I thought about trying something like that today but about the same time I thought it Mother Nature decided to pour rather than drizzle.
Maybe tomorrow.
Again Wow!
SQ

Spectacular. Nature's perfection.
I am photography deficient. I envy the talent seen on so many blogs. I can only write words about what I see and hear.