Matter of fact, fifty girls for sure! Another twenty-five could be either girls or boys.

As usual, I was up past 1am last night. By 5:30 I was sleeping soundly, when suddenly a rude noise jolted me awake! The phone? Who would be calling at 5:30 in the morning? The United States Postal Service, that's who. They called to say Hubby's baby chicks had arrived and could he please come pick them up. NOW?

I tried desparately to return to lala land. But once Hubby's babies were all safe and sound in the garage, his excitement kept me from it. I know he was disappointed that I didn't make the journey to the garage until it was time to feed the dog. I know what chicks look like. Yeah, they're cute. They're also dirty, nasty birds that lay delicious eggs!

The hens we have now (plus one remaining rooster - the other rooster was tough) were given to us when they were about six months old. They didn't require all the special care and equipment. And so our journey begins...

This is Hubby's set-up. We had a roll of aluminum just the perfect size to form the pen. He drilled holes at the top edge and tied the sides together with bailing twine to keep it in a nice oval. We already had one heat lamp from when the goats were babies. He bought a second one and some more waterers and a couple of feeders. 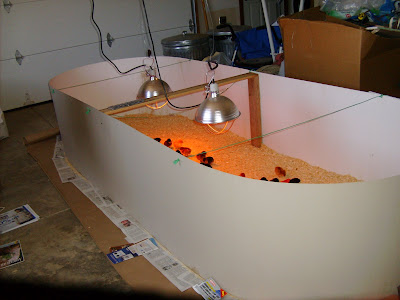 He probably put more anxiety-filled preparation into this project than he did for his children's birth! All week he has been testing his heating ability - to get the enclosure up to ninety-five degrees. Thank goodness we're heating with wood now instead of propane.

The chicks came in three separate boxes. One box of twenty-five 'Easter-egg' hens (they lay bluish-green eggs), one box of custom mixed hens (five different breeds, five of each), and a bonus box of twenty-five free chicks. They may be any breed, either sex. The free ones ended up being black with white bottoms. Cute! 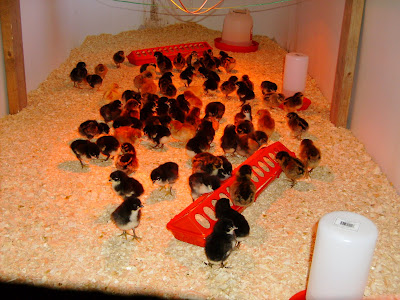 The first thing he had to do was take each chick and dip it's beak into the water to teach them where it is. We were going to band the legs to identify which was which, but their little legs are so tiny, we were afraid we would cripple them with the bands. Besides, their markings at this age are distinguished enough to tell them apart.
About six months from now we'll be up to our eyeballs in eggs! We hope to sell enough to pay for the feed. We'll keep what we need and donate the rest to the local food bank or our church. Stay 'tuned' for future updates on our life with chickens.

Lilly, Congratulations on your "girls". Thanks for becoming my first follower. I very new to this, but something I've been wanting to start doing for quite a while now. It seems like I'm spending all my time just trying to navigate right now. I know it will all become more clear shortly. I enjoy all 3 of your blog sites. Interested idea to start different sites for different subjects. I'll wait until I get the hang of one site first.

Living in the suberbs of Atlanta, GA, I LOVED reading about your chick adventures! Sure wish I could help you consume some of those yummy fresh eggs!

How lovely these chicks look,reminds me of our home when we were growing up.FARM LIFE SURE HAS A CHARM ALL IT'S OWN.